Why is Mao Zedong so admired in China when he killed over 200 million Chinese?

Because Mao is the founder of the PRC of course the modern day ruling CCP cannot talk about him too negatively, so their official stance was that he was ‘70% good 30% bad’.

But the reason why he is ‘justified’ is because he is founder of the party that controls modern China. I’ll refer to Paul Denlinger’s answer and go over why his response is ignorant

First off, as is typical of pro Chinese answers by him and others on Quora, he goes into whataboutism and HAS to mention America / Western countries

Have you heard Americans complain about the 680,000 fellow Americans killed in the Civil War? Never, right? That is way more Americans than have been killed in foreign wars. The US at that time had a much smaller population in the 1860s, so the percentage of American casualties hit the society very hard.

But when the Japanese killed 2,500 Americans at Pearl Harbor, or the 9/11 attackers kill 3,000 Americans in New York City, you never hear the end of it. That is because it was non-Americans killing Americans on US territory, and because the US government and media mobilized American public opinion to support the government’s policies.

All governments do that; they will not let a great opportunity to mobilize public opinion get away.

They all use what other countries did to justify their behavior – it’s the ‘they did it, why can’t we do it too’ using other’s wrongs to justify your own wrong. Not only that but it’s false equivalence. the Civil War was a war. The people that died as a result of the Great Leap Forward was not from war but from Mao’s domestic policies. It’s not the same at all.

Also, Mao did not really set out to kill Chinese. He had some bad policies which led to starvation, but this was because he was not an economist, and other party members were afraid to speak out against his policies because, after all, he was the founder of the People’s Republic.

The problem here is that nobody was allowed to say no to Mao or tell him that his economic policies were unfeasible – and this is the same reason why all the pure communist countries failed with a centrally planned economy – it doesn’t work. You cannot control what nature does. Some years you might have a drought, some years you have a flood etc you end up with underproduction or overproduction of resources, you can’t set a certain quota and expect to meet that quota every year. This is the downfall of centrally planned economies (Economics was my major).

The truth is that with any society which aspires to greatness in a short time, including the US, Soviet Union and China, lots of unfortunate people are going to die on the road to progress.

That is the reality of the human cost of progress.

This is also a bad justification. First he uses the Soviet Union as a great country which collapsed in the early 90s lol. And then he uses the US as an example – which President of the US killed that many people with a domestic policy? I don’t recall. What about Canada? Australia? UK? Japan? Did those countries have leaders that killed millions with a domestic policy like Mao did?

Yes I agree every country has skeletons in their closet but Mao killing millions of his own people and then brushing it off with ‘oh thats just the price of progress’ is real ignorance.

Nanjing decade – Wikipedia
Period in the history of the Republic of China from 1927 to 1937 The Nanjing decade (also Nanking decade , Chinese : 南京十年 ; pinyin : Nánjīng shí nián , or the Golden decade , Chinese: 黃金十年 ; pinyin: Huángjīn shí nián ) is an informal name for the decade from 1927 (or 1928) to 1937 in the Republic of China . It began when Nationalist Generalissimo Chiang Kai-shek took Nanjing from Zhili clique warlord Sun Chuanfang halfway through the Northern Expedition in 1927. Chiang declared it to be the national capital despite the existence of a left-wing Nationalist government in Wuhan . The Wuhan faction gave in and the Northern Expedition continued until the Beiyang government in Beijing was overthrown in 1928. The decade ended with the outbreak of the Second Sino-Japanese War in 1937 and the retreat of the Nationalist government to Wuhan. GDP growth averaged 3.9 per cent a year from 1929 to 1941 and per capita GDP about 1.8 per cent. [1] Nanking was of symbolic and strategic importance. The Ming dynasty had made Nanjing a capital, the republic had been established there in 1912, and Sun Yat-sen ‘s provisional government had been there. Sun’s body was brought and placed in a grand mausoleum to cement Chiang’s legitimacy . Chiang was born in nearby Chekiang and the general area had strong popular support for him. The Nanjing decade was marked by both progress and frustration. The period was far more stable than the preceding Warlord Era . There was enough stability to allow economic growth and the start of ambitious government projects, some of which were taken up again by the new government of the People’s Republic after 1949. Nationalist foreign service officers negotiated diplomatic recognition from Western governments and began to unravel the unequal treaties . Entrepreneurs, educators, lawyers, doctors, and other professionals were more free to create modern institutions than at any earlier time. However, the Nationalist government also suppressed dissent, corruption and nepotism were rampant and revolts broke out in several provinces; internal conflicts also perpetuated within the government. The Nationalists were never able to fully pacify the Chinese Communist Party , and struggled to address the widespread unrest and protests over their failure to check Japanese aggression . The party-state [ edit ] Zones of control during the “Nanjing Decade” The organization and function of the KMT one-party state was derived from Sun’s “Three Stages of Revolution” and his policy of Dang Guo . The first stage was military unification , which was carried out with the Northern Expedition. The second was “political tutelage” which was a provisional government led by the KMT to educate people about their political and civil rights, and the third stage was constitutional government. The KMT considered themselves to be at the second stage in 1928. The KMT set up its five-branch government (based on the Three Principles of the People ) using an organic law includi
https://en.wikipedia.org/wiki/Nanjing_decade

In fact China was already on its way to becoming a developed country during the RoC era before the Japanese invaded. What happened was the Japanese invaded which stopped the economic development of China, and then since the KMT fought most of the wars against Japan, Mao’s communists took advantage of their weakness and seized the country after that. That’s the facts of what happened. The CCP tho will say in their textbooks that they fought the Japanese more which is not true. and that Mao saved the country from the Japanese, improved the economy from the fractured warlord era and re-united the country which is a distortion of history and purposely leaves out the Nanjing decade.

The reason Mao is admired even more today is that he was a great strategist who understood politics and struggle in a way few people do. Today, in the 45 years since he died, China has become a very powerful country with a huge economy which is the largest trading partner of more than 150 countries.

Mao laid the foundations for today’s China, which his successors built on to lift more than 600M Chinese out of poverty.

The reason why China has become a very powerful country with a huge economy is NOT because of Mao it’s because of a man named Deng Xiaoping who opened up China to a market economy and shifted the country to capitalism. Under Mao, the GDP grew at an anemic rate compared to Western countries and to South Korea, Japan, Taiwan, Singapore and Hong Kong at the time. 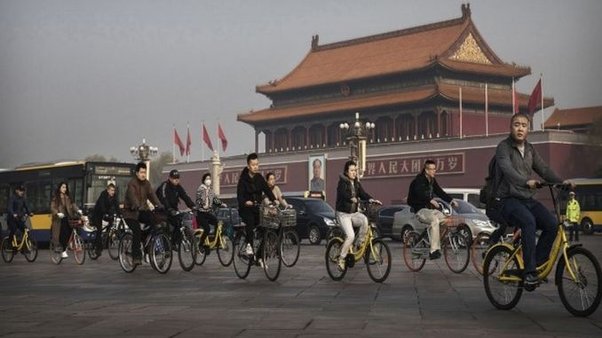 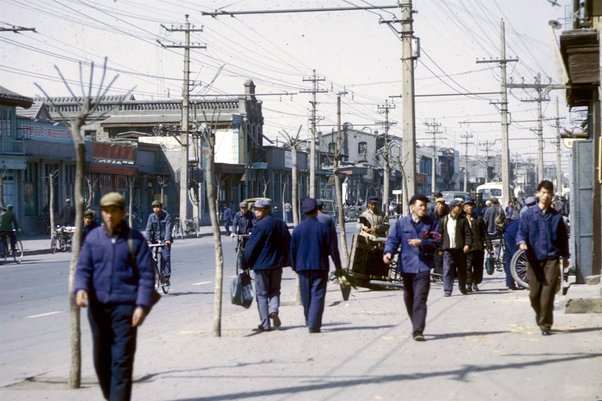 ^ This is Mao’s China. This is the ‘foundations’ that Mao built. Basically China was inconsequential on the global stage at that time, everyone was poor, nobody could own any material wealth, everyone wore the same clothes and for 30 years little happened in the country to make as great and powerful as it is today. 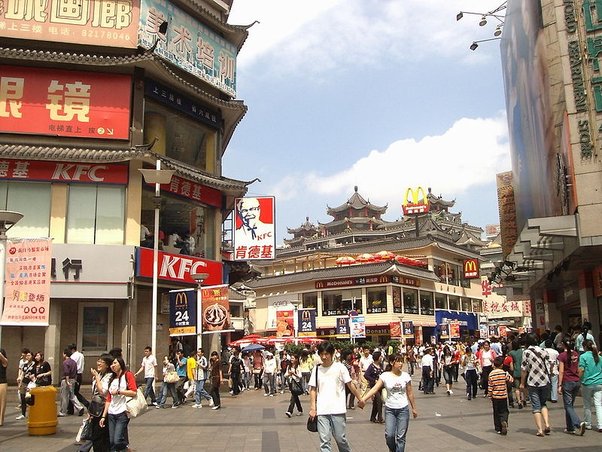 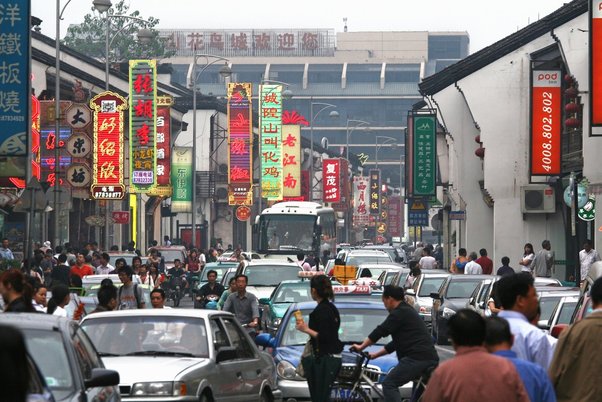 ^ This is China after Deng Xiaoping changed China’s economic policies to be more capitalist, allow foreign investment, allow startups and businesses to be privately owned instead of state owned etc it becomes more like the China you see today.

So it’s absolute BS that Mao ‘laid the foundations’ for modern China. It was Deng Xiaoping that did so. You could erase Mao from the timeline and China would still be just as developed today but probably would have done it faster because they didn’t have to deal with 30 years of economic stagnation and would have saved millions of lives in the meantime. Oh and not to mention the Cultural Revolution which destroyed many artifacts and books relevant to Chinese history and stopped a generation of Chinese from receiving higher education. Is that ‘the price of progress’ too?
The only meaningful contribution Mao made was introducing simplified Chinese which I give him credit for increasing literacy rates nation wide but aside from that, there’s very little else positive that he did for China.