Who is the most overrated point guard in NBA history?

Now I’m not saying he’s not deserving of his accolades and respect, but a lot of modern fans have recency bias and are putting Curry as the #2 PG all time and a top 20 player all time. This may be jumping the gun a bit given his short career.

Here’s the problem with people putting him top 20 all time / #2 PG all time:

-He only has 7x all star appearances

-He only has 6x all nba 1st/2nd team selections

-NO Finals MVP. A bench player won the Finals MVP over him in his first Finals and KD won 2 over him. Curry was in his prime the whole time. I don’t want to hear any excuses.

-Shot only 40% in the 2016 Finals – thats awful given that Curry is billed as the ‘greatest shooter ever’ and made costly turnovers especially in the Game 7. He blew a 3–1 lead while having a 73 win team and being the ‘unanimous’ MVP. I don’t want to hear excuses like he was injured etc Isiah Thomas was injured in 1988 and still played great. and Kyrie shot the game winner right in his face.

-a huge defensive liability – there’s a reason why offenses often had to exploit Curry and get him to switch on their main scorer to get buckets – because Klay, Iggy and Draymond were all such good defenders that offenses couldn’t do anything against them. They would try to get Curry on them instead so they could exploit his poor on ball defense.

-really what has he done without Klay? No seriously. With Klay out for only a single game in the 2019 Finals, he was unable to beat the 2019 Raptors with Kawhi and Lowry. Both of those players are ranked below Curry all time – Lowry far behind actually. In 2021, he couldn’t even make the playoffs without Klay. This is the #2 PG all time? In his prime?

Usually there’s a few arguments Curry fans always make for him being this high despite his short career:

while impressive, that alone doesn’t mean automatic top 20 player. Mel Daniels also has 3 rings and 2 MVPs and I don’t think he’s ever mentioned in the greatest centers discussion (which he should be). Willis Reed has 2 rings, 1 MVP and 2 Finals MVPs and is not considered top 20 by anybody either. Curry’s rings in particular all have an asterisk – his first because he was facing an opponent who was badly undermanned (Kyrie and Love being out) and his second two when KD joined the team and had arguably the easiest path to 2 championships in NBA history. It was a joke. and KD became the best player on the team, not Steph. People give KD a hard time for his rings, but it’s Steph that should be getting a harder time, because KD outshined him in the playoffs. How can you say that KD doesn’t deserve his rings but Steph does when KD was the better player on the team? Doesn’t make sense.

“But he’s the greatest shooter in NBA history”

Since when did we care about shooting this much? I don’t hear anyone putting Ray Allen or Reggie Miller over Kobe Bryant or Allen Iverson even though Allen and Miller were much better shooters than those two. But now of all a sudden shooting makes you a top 20 player? lol. Artis Gilmore should be top 20 too, he has an MVP, ring, finals mvp, and the highest FG% AND TS% of all time. Mark Price, Louie Dampier, Peja Stojakovich, Drazen Petrovic, Pete Maravich, Craig Hodges etc all these guys should be ranked much higher because of their shooting. Stockton should be way better than Isiah cause he was a much better shooter.

“But he changed/revolutionized the game!’

Did he really though? 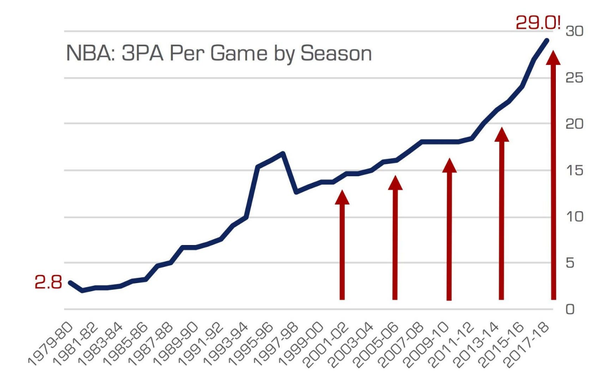 The 3PA has been going up steadily since the mid 2000s. The major factor in this is the hand checking rule changes implemented in the mid 2000s. Without hand checking perimeter guards now have it much easier and you can see 3P shots go up. Of course since 2014, the trend has been increasing but that’s not a revolution – that’s acceleration of an existing trend. Literally evolution, not revolution. It also should be noted that so far, we have not seen any non-Warriors teams win with the 3 point shot as their main weapon. Kawhi was a midrange player (2019 Raptors). Lebron/AD are midrange/interior players (2020 Lakers). Giannis is an interior player (2021 Bucks). We have not seen any other team duplicate the Warriors success. So much for changing the game.

Curry also has the steepest decline of any superstar in the playoffs as seen from the video above which Ben Taylor (a sports journalist, statistician, watched almost every nba classic + modern game available) compiled.

So yeah I get that Curry is the greatest shooter ever, and he has all the 3P records, but to rank him this high already is premature. I have CP3 ranked ahead of Curry – yes even though he has no rings he has a longer career, more all star, more all nba, can play defense, led league in assists multiple times, can shoot almost as well and if CP3 had Curry’s teammates no doubt he would have won some rings and MVPs. He brought the 2020 OKC team to 7 games against the Harden/Westbrook Rockets. His supporting cast was barely better than the 2021 Warriors which Curry failed to make the playoffs with. He then took the 2021 Suns all the way to the Finals and went 6 games against an extremely dominant player (Giannis) – at 36 years old! I highly doubt Curry could do such a thing at 36 years old given that he couldn’t even make the playoffs in his absolute prime. Do people still think I’m crazy for suggesting that CP3 is better than Curry? And for people who keep saying CP3 choked etc – CP3 at 36 years old averaged 23/3/8 on 55% shooting while being guarded by Jrue Holiday one of the best guard defenders of his era. Curry meanwhile in his absolute prime averaged 23/5/4 on 40% shooting in the 2016 Finals guarded by Kyrie who is not that great of a defender.

I have Curry top 30 all time and KD is way ahead of him in my list in my top 20. I don’t think KD and Curry are particularly close as people think. KD is basically a 7 foot version of Curry, which means he’s almost strictly better. And of course, he obviously won 2 Finals MVPs OVER Curry when they were both in their prime and on the same team. So.. yeah that’s a pretty definitive argument on why KD is better.