What if Lebron James didn’t choke in the 2011 finals? Would the Heat won the championship?

I think Lebron choking in the 2011 Finals is a bit exaggerated.

I know, this is crazy right? Whenever I tell people he didn’t choke that badly they all think I’m trying to make excuses for him, I’m a ‘bronsexual’ etc even Lebron fans and Nick Wright don’t give Lebron any slack for that chokejob right? biggest chokejob ever in the Finals!!! Terry and Barea outplayed him! Is what all the haters say.

Well I went back and watched the games. Let’s go over what actually happened.

So this is Mavs vs Heat 2011 Finals Game 4- the game that Lebron scored 8 points in. That’s gotta be Lebron’s worst game ever right? At least one of his worst chokes ever. Ok, let’s actually break down what happened each Heat possession in the 4th quarter and how the Mavs came back starting from 1:30:54 in the video.

4th quarter – 6:30 left in the game – Heat still have the lead 78–75. Chalmers brings up the ball. Gives it to Wade, then gives it back to Chalmers. Chalmers misses the layup and ball goes out of bounds. Chalmers inbounds it to Bosh, Bosh shoots and misses. Mavs score on their next possession.

Next Heat possession – 5:38 left in the game – Heat have the lead 78–77. Chalmers gives it to Wade, ball goes out of bounds. Wade gives it to Chalmers. Chalmers tries to drive in but gives it to Bosh instead. Bosh misses the layup and it gets stolen from him and Mavs score again.

Next Heat possession – 5:01 left in the game. – Heat trailing 78–79. Wade run the ball up the court and it gets stolen from him and hit out of bounds. Mavs ball. Chandler gets fouled and hits the free throw.

Next Heat possession – 4:25 left in the game – Heat trailing 78–80. Lebron runs the ball up the court, it gets passed to Wade, Wade passes it to Miller and Miller loses it and ball goes out of bounds. Mavs ball.

Next Heat possession – 3:10 left in the game – Wade brings the ball up the court. Wade pulls up from 3 and misses.

Next Heat possession – 2:37 left in the game – Wade brings the ball up, drives inside the lane and feeds it to Bosh. Bosh loses the ball, Wade gets it back, passes it to Lebron. Lebron misses a pullup jumper. Miller gets the offensive rebound, passes it to Wade, who passes it to Miller. Miller drives in and misses. Mavs gain possession and Dirk sinks 2 free throws. 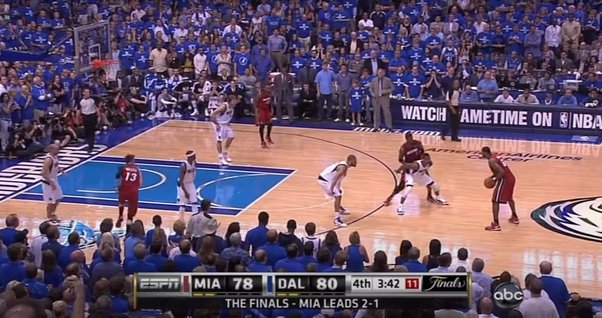 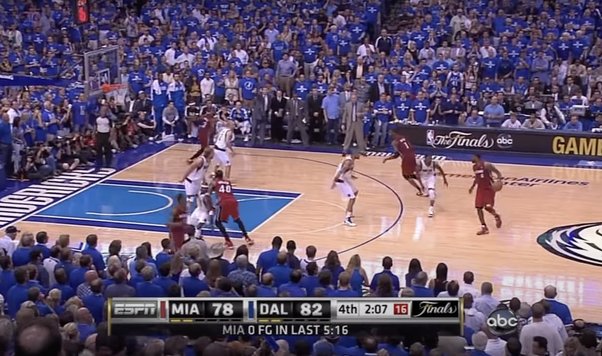 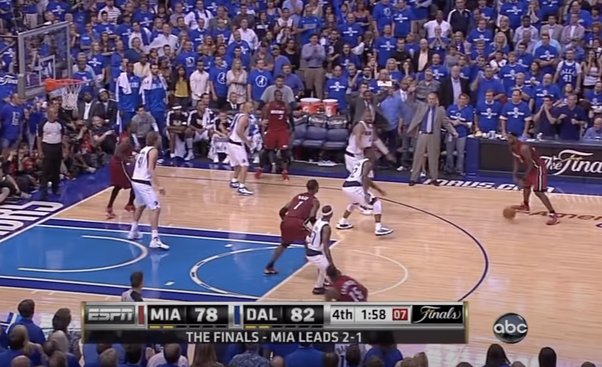 Mavs give Lebron a bit of space (Bron hasn’t developed an outside jumper at this point in his career) but are ready to double him if he tries to go inside. Lebron isn’t confident in his outside jumper and passes to Bosh who then gets fouled. Bosh hits both free throws. 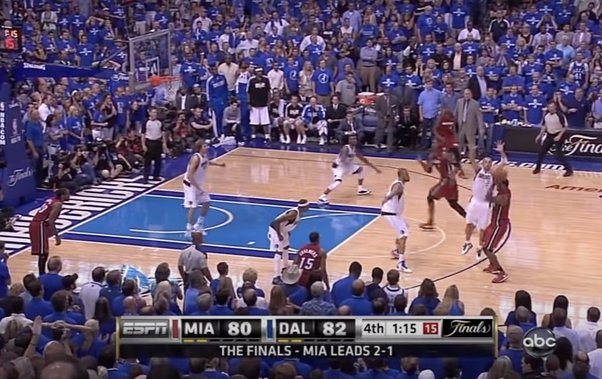 See how the Mavs are in Lebron’s face again? Everytime they see Lebron they are ready to double him. Lebron passes it to Haslem who misses.

Next Heat possession – 0:32 left in the game – Lebron throws an outlet pass to Wade who gets fouled. Wade hits 1 out of 2 free throws. Mavs get a timeout. Dirk gets the ball and makes a layup.

Next Heat possession – 0:14 left in the game – Heat trailing 81 – 84. Wade gets the inbound and drives in and makes a layup. Mavs then get the ball and Bron has no choice but to foul Terry given the limited time left. Terry makes both free throws.

Next Heat possession – 0:07 left in the game – Heat trailing 83 – 86. Miller inbounds it to Wade, Wade loses the ball and passes it back to Miller, Miller misses the three. Game is over.

So in the last 4th quarter of that game, supposedly Lebron’s ‘worst’ game. Who was actually responsible for the Mavs winning? Miller, Wade and Bosh missed a lot of shots or turned over the ball which gave the Mavs extra opportunities to score. I think Lebron only gets part of the blame because he only got the ball a few times to begin with – the Mavs tried to deny Lebron any possessions in the first place. Then whenever Lebron got the ball, Mavs played excellent zone defense on him forcing him to pass it. Yes Lebron could have been more confident in his outside jumper, but he was essentially blocked on driving in most of the time. Rick Carlisle knew Lebron didn’t have much of an outside jumper so he basically got the Mavs to crowd his driving lanes every time he got the ball and try to deny him as many possessions as possible. It worked.

In conclusion, Lebron’s ‘choking’ is really a result of the Mavs excellent strategy to limit Lebron’s touches + daring Lebron to shoot from the outside and blocking his usual driving lanes with excellent zone defense. Wade/Bosh/Miller had a lot of missed shots/turnovers. Only casuals would blame the loss 100% on Lebron. This is the reason why Lebron had a low PPG but high FG% (48%) during the series. Just think about it.. nobody who chokes in the traditional sense would have such high efficiency and also average 7 RPG and 7 APG in the series. The people who keep saying Terry outplayed Lebron only look at the PPG and didn’t watch what actually happened in the game.