What do you think about China?

-China has way better gender equality than any of its surrounding countries. And the women act very different from Korean/Japanese/Taiwanese women. They are less traditionally feminine, more assertive, more ambitious, and in a lot of cases can actually be more dominant than the men. It’s almost a role reversal compared to other countries, lol. It’s better in China to be a girl. Everything is paid for by the guys. The guys are pretty subservient to their gfs. The groom’s family pays for the wedding, not the bride. There’s a dowry that the men have to pay. And because of the skewed gender ratio, girls have the pick of the litter. Pretty big contrast to Korea/Japan where its pretty much the opposite. Heres a nice graphic that is based on the stereotypes: 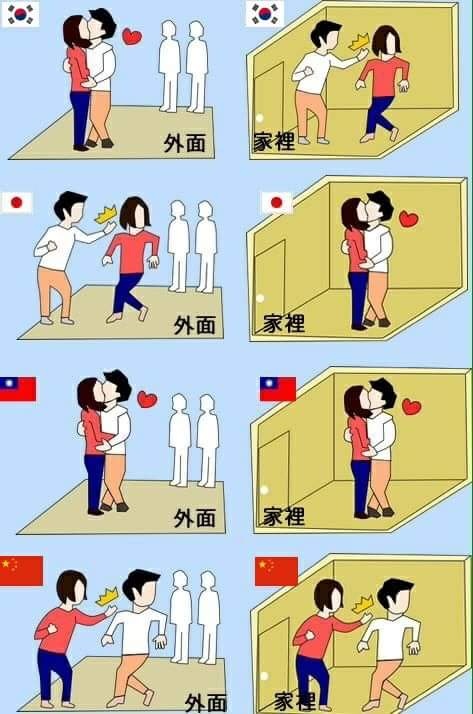 -Chinese people are very results driven, sometimes to the detriment of other qualities. You’ll notice that in whatever they do, Chinese care solely about the end result and how effective it is. If you look at Japan and Korea, they also care about other things like the visuals, the aesthetics, the process, the technique etc. This can pervade in so many different ways too, Chinese food focus solely on whether or not it is delicious. Korean/Japanese care about how the food is prepared as well. Chinese female sports players focus only on being good at what they do. Korean/Japanese female sports players focus on looking good, in addition to being good at what they do. Chinese students focus on getting good grades. Korean/Japanese students focus on looking good, in addition to getting good grades. When Chinese design phones, they make the phones have really good specs for a really good price. When Apple or Sony design phones, they care about the materials and crafting process as well as the specs. See the difference?

-Chinese are very wealth driven. Now you may say well every person cares about wealth and being rich right? Of course everyone wants to be rich, but not everyone makes it the sole overriding goal of their entire existence the way Chinese do. Everything Chinese do is based on how to make the most money, which items to spend money on that will show off the most wealth, etc. The whole society is driven by how much wealth you have. They judge people based purely on their wealth. That is not the case in Korea, Japan, Taiwan or Western countries actually. It’s easy to say that some parts of the US like Beverly Hills are pretty materialistic, but you can’t say that about the entire country. China on the other hand… I can confidently say that anywhere in the country you will be judged by your wealth and what you own.

-Religion wise, because of China’s communist past, very few Chinese are religious, most Chinese are atheist. Taiwan and Japan are mostly Buddhist. Korea is uniquely a Christian country, perhaps relating to how socially conservative they are.