Is LeBron James the most polarizing NBA athlete of all-time?

Lebron has in my experience, surpassed Kobe as the most polarizing NBA player of all time – measured by the amount of people who idolize him vs the amount that hate him. 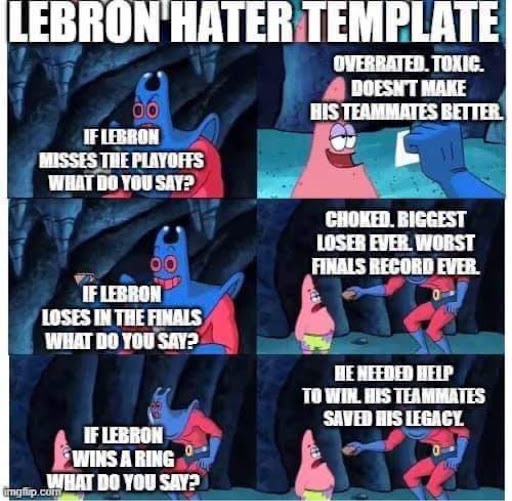 I would say that while Kobe has many haters, there are still way more fans than haters, judging from the amount of Kobe worship on social media. Basically any time is Kobe is not brought up in any conversation, their fans will say ‘the disrespect to Kobe! but what about Kobe! Did y’all forget about the Mamba!???’ etc so while Kobe is polarizing, I would say he’s still a net positive athlete in his image. His death earlier this year (RIP) just reflected how idolized he was around the world. Kobe’s positive traits (his 5 rings, scoring accolades, “mamba mentality”, work ethic) tends to be much more well remembered than his negative ones (most missed shots all time, not the easiest teammate to get along with, missing the playoffs in his prime, losing a series while up 3–1 etc).

Another example of how much more net positive Kobe is viewed than Lebron is seen in the fact that Lebron gets blamed for not meeting Kobe in the Finals – because he lost in 2009 to the Orlando Magic – despite that team being completely carried by Lebron and nowhere near a Finals caliber team. Whereas Kobe gets absolutely no blame for getting swept in 2011 to the same Dallas Mavs team – and FYI guarded by Jason Terry (who actually guarded Kobe, not Lebron since he’s an SG) – that people criticized Lebron for losing to in 6 games. Kobe could have met Lebron in the Finals that year – and he was the defending champ that year – and no one ever brings this up but brings up Lebron’s 2009 loss to the Magic.

Lebron on the other hand – seems to have more haters than idols. I’m in several basketball social media groups, I’m active on Youtube, Facebook, Twitter, Instagram etc and let me tell you the amount of people that hate on him is just ridiculous. There’s literally people on social media who dedicate each and every day to making some kind of hate meme or post about him. Then they will call anyone who defends Lebron a ‘bronsexual’ which is both immature and childish. And it’s always about the exact same reasons too, “Lebron joined a superteam” “Lebron needed help to win” “Lebron is soft, whines and is a crybaby” “Lebron is 3–6 in the Finals and is the biggest loser ever” “Lebron choked in the 2011 Finals” etc like a broken record.

Contrary to Kobe, these people focus on Lebron’s negative traits and never his positive ones, never ever praise him when he wins, and always blames him when he loses. When Lebron wins, it’s always his teammates carrying him. When Lebron loses, it’s always his fault. For Kobe, it’s the opposite – whenever he wins, it’s all Kobe and his mamba mentality doing the work. Whenever he loses, it’s because his teammates didn’t step up or were crap (Smush Parker and Kwame Brown always get brought up despite the fact that Lamar Odom was a pretty good player as well).

Also, people always hate on Lebron for only scoring 8 pts in a Finals game in 2011, well there’s lots of other greats who have similar bad performances in the Finals that never get brought up. Kareem got demolished by Moses Malone in 1983 Finals, Magic turned into ‘Tragic’ in the 1984 Finals, Bird had only 8 points in game 3 of the 1981 Finals, Kobe only had 8 points in game 5 of the 2000 Finals and also shot 38% in the 2004 Finals and shot 6 for 24 in the 2010 Finals game 7, Wilt had perennially choking performances in the playoffs and Finals, Duncan missed that potential game winning layup in the 2013 Finals etc in fact out of the top 10 players in NBA history only Russell and Jordan could be considered ‘truly’ clutch as they had next to no bad performances in the Finals.

Heck the Finals record as a measuring stick, came into being because of Lebron. Prior to 2014, no one on social media ever talked about Finals record for any other player. Not Kareem, not Magic, not Bird. But because of Lebron, now they start talking about Finals records – the reason being that they can take an accomplishment that is uniquely Lebron’s – going to more Finals than any other player in recent history – and turn it into a negative. And it’s one that Lebron can never win, because his teams were always outmatched in the Finals, and his own teams always overachieved, it’s a way the haters can turn something that would be celebrated for any other player (for example, Iverson’s lone Finals appearance is considered the crowning achievement of his career despite him losing), and turn it into a point to criticize. It’s also implying that losing before the Finals would actually be better in order to preserve the Finals record – but that idea is blatantly ridiculous, as anyone who has played sports knows. You play to win and in order to win you have to reach the Finals. Only one team can win, so there’s of course a chance to lose. But to focus on Finals records implies that missing the playoffs would actually be better. That makes no sense.

Why do so many people on social media spend their every waking moment to hate on him? If I had to guess there’s a few reasons:

-Lebron gets too much media attention, and people get annoyed by that
-Lebron’s too successful, and that makes people envious of him
-They don’t like Lebron’s fanbase and thus they don’t like Lebron either for creating that fanbase
-Lebron is threatening their favorite idol (usually Jordan or Kobe) and they don’t like that Lebron has a chance or is currently surpassing their idol’s legacy
-Lebron habitually beat their favorite teams (usually the Raptors or Celtics but pretty much any team since Lebron has a winning record against almost every team)
-Recency bias. Lebron is fresh in people’s memories, and whatever he does on the court (or even off the court – I even read some posts where people blamed Lebron for Nike’s sweatshops, said he was a communist sympathizer and letting his son smoke weed which is ridiculous) is scrutinized unlike any other player before. Jordan played in an era without social media, and Kobe’s era was when social media was just starting. They never had the microscope of billions of users like Lebron does.

I can’t explain any other reason why these people would spend so much time to make hate memes and posts every day, it’s not like Lebron ever did anything to them personally or anything, and perhaps it’s proof of how successful Lebron is that he has so many haters. For example nobody hates on John Paxson or Kyle Korver – because they are not superstars. Only successful athletes become hated.