Let me actually respond to the guy who foolishly posted about how Kobe was the GOAT and I will go through his points here.

Kobe played half his career post hand checking rule changes. That happened in 2004–2005. Jordan meanwhile, played the entirety of his career pre hand checking rule changes. He even played against defenses specially designed to stop him, called the Jordan rules. This is not even close to being true. Let me list the all time great perimeter defenders Jordan had to go up against: Joe Dumars, Sidney Moncrief, Maurice Cheeks, John Stockton, Gary Payton, Alvin Robertson, Michael Cooper, Mookie Blaylock, Dennis Johnson, Dennis Rodman. These are all ALL time defenders at the perimeter.

And how the hell does having a rape case on your resume actually help your GOAT status? that makes no sense to me. Jordan’s dad got murdered, and he was constantly accused of gambling. But nobody brings that up for Jordan’s GOAT status. You really got to spin his rape case into a POSITIVE for Kobe? That’s pathetic.

Kobe did not win 2 rings by himself. That’s absurd. He had Pau Gasol, Lamar Odom, Andrew Bynum, Ron Artest, Derek Fisher. That’s a solid supporting cast. It’s ridiculous to say Kobe won those by himself. Moving on.

Kobe played 5 seasons more than Jordan, so the all time scoring thing is kind of misleading. Do people think Karl Malone is a better scorer than Jordan and Kobe? But he has higher scoring all time? And Kobe is not more clutch than Jordan. Kobe is 7/28 in clutch playoff moments. The reason why he has more buzzer beaters total is because he played more regular season games and he had more closer games than Jordan did, period. 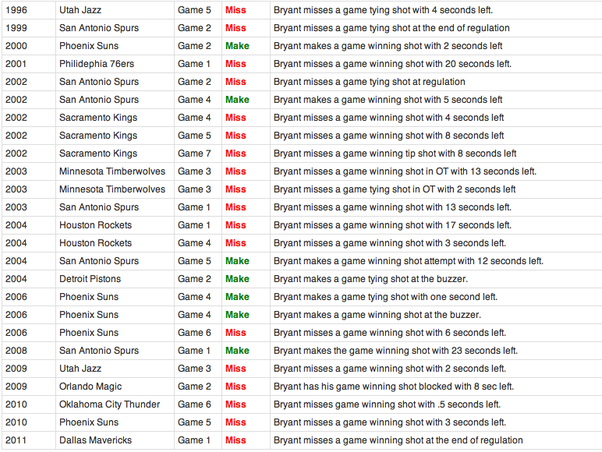 This is just disgusting, Phil Jackson held him back??? Without Phil Jackson, Kobe missed the playoffs in his prime in 2005! And Phil Jackson gave him enough of a green light to score 81 points!! Taking 46 shots! And you are really complaining that he sat Kobe out that game? How about all those games Curry and Harden sat out because they were ahead? How many times would they have scored 81 had they stayed in the game? Remember the game Klay Thompson scored 37 points in a quarter? Yeah, what if he stayed in the game? Phil was doing his job as a coach. It’s another delusional Kobe fan thinking that everyone is out to get him, the NBA, the media, and now Phil Jackson too.

Yeah, all of this is just complete BS. Jordan had killer instinct. How do you even measure that? Higher scoring numbers? Ok so Karl Malone better than Jordan? Higher points in a game? Ok so David Thompson who scored 73 in a game before is better than Jordan then? More game winners? Only in the regular season where it doesn’t matter. 2 Championships alone is total BS. Mamba work ethic is just some stupid Kobetard crap again – how does that make him the goat? Jordan had great work ethic too, as do ALL great players!

This answer is the most bullshit answer related to Kobe I’ve ever read, and it’s a travesty it has so many upvotes. Ridiculous.