Is feminism needed in South Korea?

South Korea is one of the most gender unequal developed societies right now, and part of the reason is the deep pervasive influence of Confucianism which is inherently gender unequal.

In modern Korean society puts even more pressure and burden on them, women are also expected to dress up everyday, look pretty all the time, and also work.

Korean men on the other hand, just have to work. That’s it. they don’t have these auxiliary responsibilities.

In addition, there’s other problems in Korean society working against women. Women are discriminated for their appearance, women can be fired if they become pregnant, women are mostly the victims of sex crimes, which the male perpetrators are often given lenient sentences for, women often receive 3x-4x the punishment for crimes than males do because the law is uneven, abortion was only legalized in 2019 (for comparison China legalized it in the 1980s), which goes to show how behind Korea is for women’s rights.

Korea could be considered a misogynist society sometimes. Here are some examples.

Edit: recently a Twitch online streamer took her own life as a result of bullying by misogynists. RIP

^ imagine being prosecuted for defending yourself from sexual assault!

^ lenient penalties for sex crimes and rape have been an issue in Korea for its entire history.

^ “The police later refuted his claims and said the incident was not a hate crime against women, as claimed, but one driven by mental illness”

This is complete BS. This is literally misogynism. Not the fake misogynism that Western women like to tweet about everywhere about playboys and stuff, but real actual hatred towards women and he gets a pass for it?

In addition foreign women often come to Korea brainwashed by Kpop and Kdramas and looking for their dream ‘oppa’ and stuff like this happens:

^ the man and the woman commit the exact same crime. The woman gets 30 years in jail and the man gets 12. How is that fair?

^ Korea has the highest gender pay gap in the OECD.

Edit: for an example of what I’m talking about it’s obvious that Korean men have very little sympathy for the women and actually say its the men that are discriminated against which is laughable. 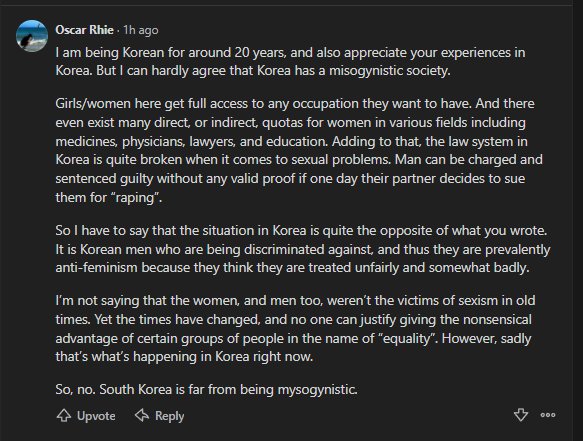 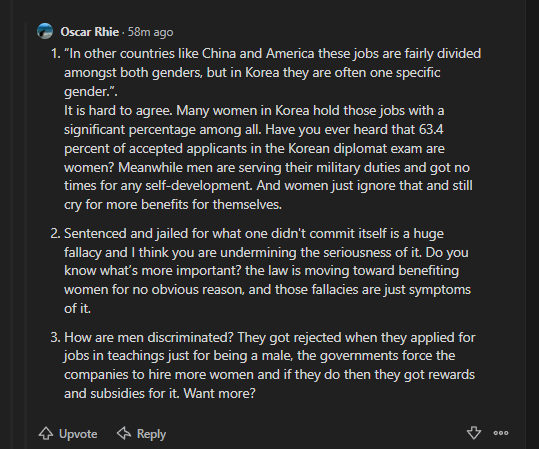 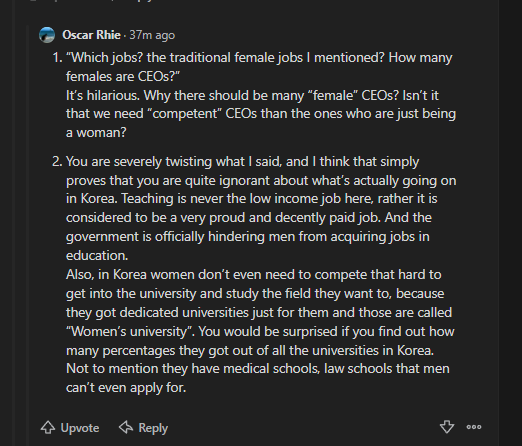 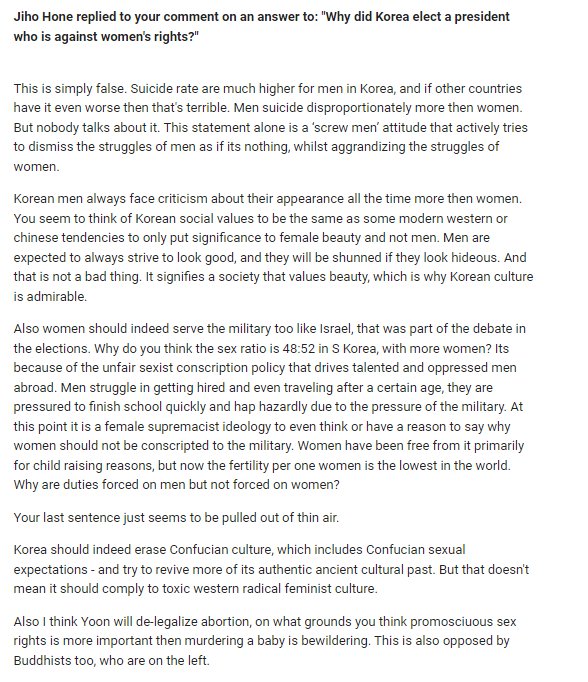 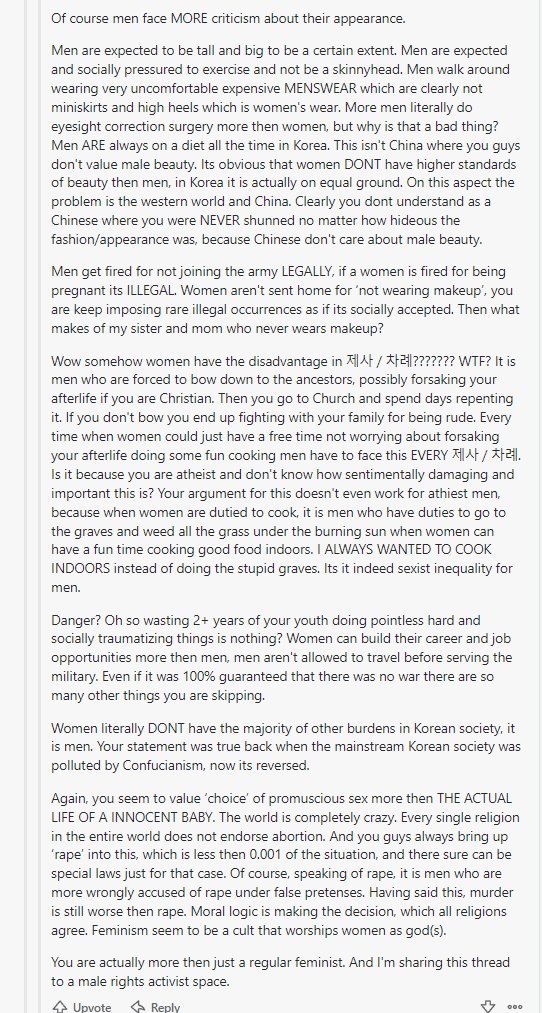 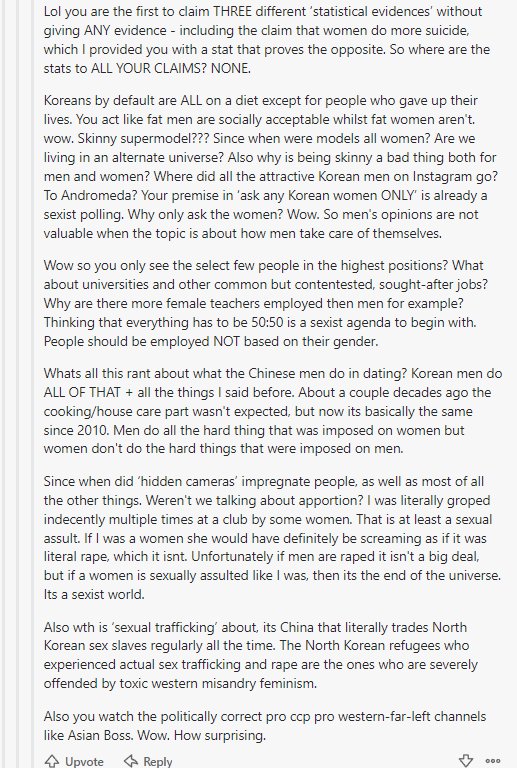 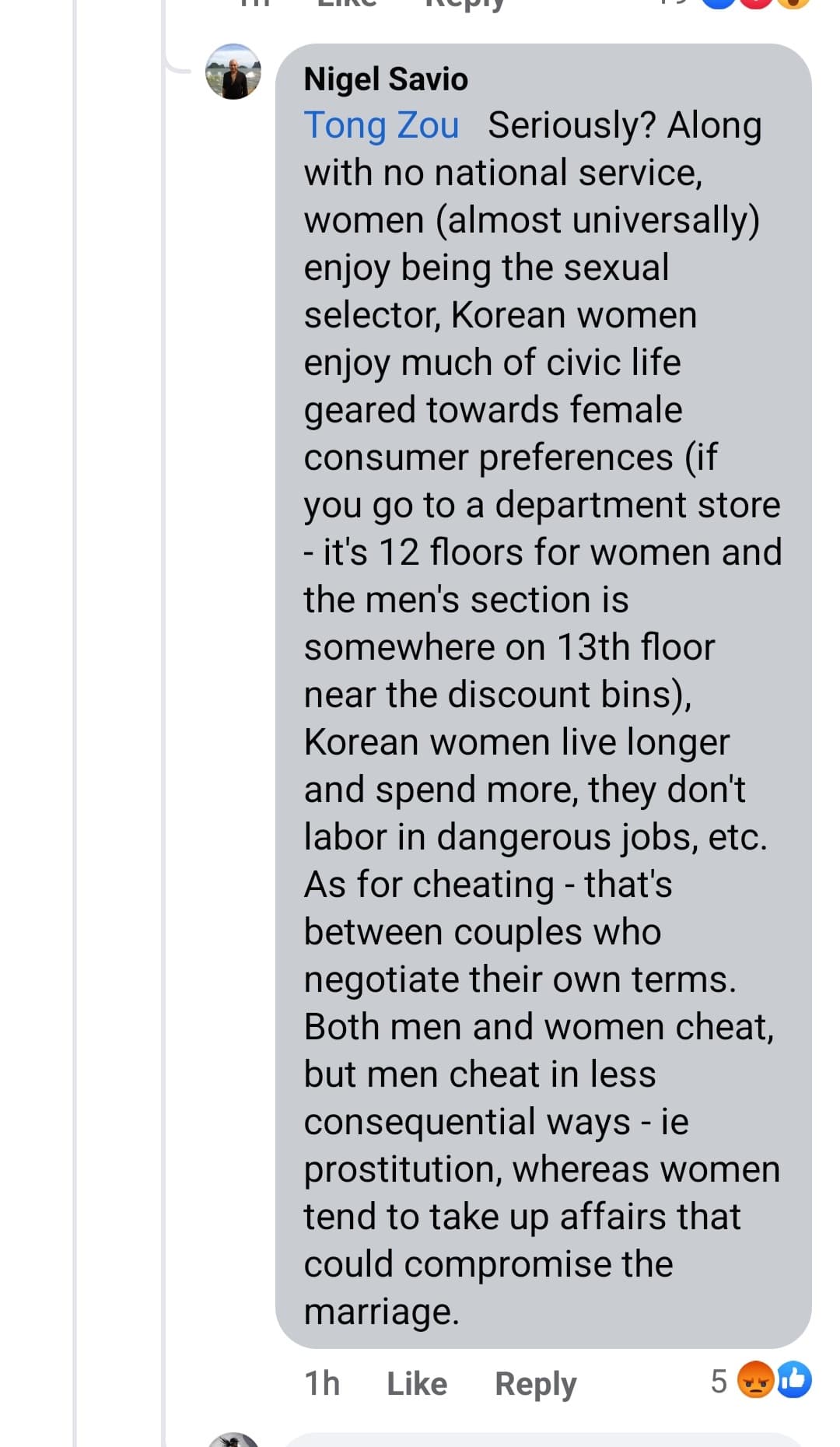 ^ This guy is clearly one of those men who believe women are inferior and should be subservient to men, they don’t deserve to have CEO jobs, they don’t believe in gender pay gap etc these are the types of guys who are common in Korea and a symptom of that patriarchal society. “Women tend to value their social life than men do” – what does this mean? Is there any formal study done on how much women enjoy their social life compared to men? Saying men are rejected from traditional female dominated occupations like teaching, or nursing or being airline attendant is hardly proof that men are being discriminated in Korea. It’s actually furthering my point that occupations in Korea are very gender divided. I can say the same thing for women who apply to STEM fields in Korea or try to manage or start up their own companies right?