How high do you rank Kobe Bryant in the best NBA player list?

Fans often have him in the top 5; analysts usually put him somewhere 8–12 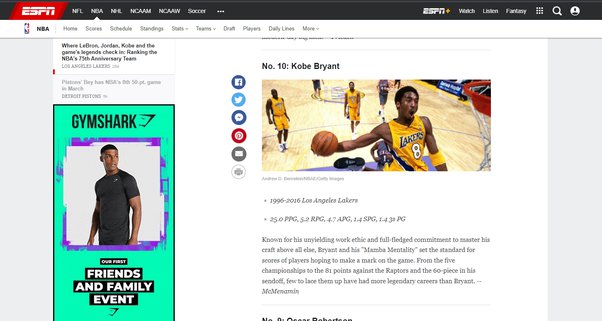 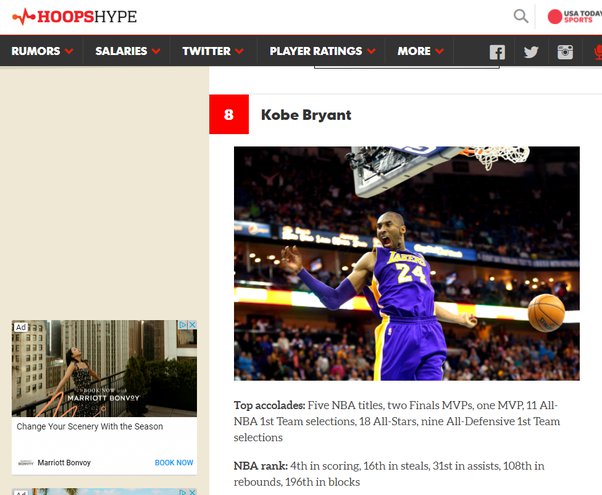 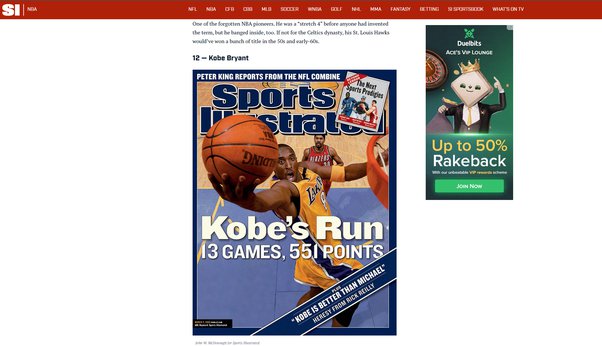 Why the huge discrepancy?

It’s because fans have an emotional connection to Kobe. They grew up with him, they saw him play 110% on the court, they know his legendary work ethic, etc

Analysts don’t care about that. Analysts care about what your production on the court was. Kobe’s production was very good, but not all time great.

https://www.boxscoregeeks.com/articles/why-kobe-was-never-a-top-five-player
One of the websites I follow the most is BoxScoreGeeks ^ who uses a Win Produced formula. In each of Kobe’s seasons, he has NEVER been a top 5 player in any of his seasons. This is contrary to what fans think – that he was the best player in most of his seasons and robbed of MVPs etc. From the analyst perspective, there’s at least 5–10 better players than Kobe in any season that he played in.
Kobe’s inefficiency contributes a lot to his bad analytics. Amongst players often considered in the top 25, Kobe has the lowest WS/48 (0.17) out of any of them except for John Havlicek. He also has the lowest PER (22.9) out of any of them except for John Havlicek and Bill Russell. (add Bob Cousy, Rick Barry and Scottie Pippen to those lists if you think they are top 25). Kobe also has the lowest TS% out of any guard in the top 25 except for once again, John Havlicek.

So casual fans may talk about his rings or his ‘scoring explosions’ in the regular season all the time, but I look at more what did he accomplish in the playoffs. I saw that Shaq was *most definitely *the better player during the 2000–2002 3-peat. It’s not debatable. Kobe fans say they are ‘equal’ but Kobe has never had any game where he was substantially better than Shaq and at best might have scored a few PPG better in some series (vs the Kings or Spurs in 2001/2002) but trailed substantially in RPG and BPG.

Then I look at the fact that he somehow had 12x All-Def selections despite the Lakers being bottom of the league in defensive rating in 2005 after Shaq left, and him being bottom of the league in defensive adjusted plus minus in his later years and wonder how legit those All-Def awards actually were. Have not seen Kobe shut down any opposing player yet. Allen Iverson, Rip Hamilton and Paul Pierce did pretty well against him in those Finals. Jason Terry averaged 20 PPG off the bench on a monstrous 75% TS% against him in 2011. But Tony Allen and Tayshaun Prince and old Jason Kidd certainly did a good job frustrating him in those series.

I look at the fact that his playoff scoring high is only 50pts and he only has one buzzer beater in the playoffs, and he blew a 3–1 lead against the Suns in 2006 (despite Stoudemire being out that series). I look at the fact that he’s 8–11 in elimination games, 7/28 on last 24s of go ahead/tying baskets in the 4th and averages 40% shooting in the Finals.

I look at the fact that Jalen Rose outscored him by 8 PPG on 10% better efficiency in the 2000 Finals.

I look at the fact that Pau Gasol had to grab 18 rebounds and Artest had to hit a 3 pointer in the 2010 Finals Game 7 in order to win it, cause Kobe’s 6/24 certainly wasn’t going to do it.

So where are these clutch moments and ‘scoring explosions’ that Kobe fans keep talking about in the playoffs? I don’t see many.

Also the fact that the Lakers missed the playoffs 4 times when he was on the team and in his last season won only 17 games. Injured or not, that’s the worst record in franchise history.

So I cannot in all conscience put Kobe higher than number 10 all time. After looking at his resume, I’m not sure if in a vacuum he’s even better than Hakeem Olajuwon or Kevin Durant. This is not Kobe hating, this is looking at his body of work.