Are there really people who think Kobe Bryant is the GOAT?

Yes. Because Kobe is one of the most popular, most effectively marketed superstars of all time. He played in a big market, he had very flashy moves, and he had all these great highlight reels. It’s safe to say that a lot of Kobe fans put him as the GOAT for emotional reasons, rather than rational reasons. They will say things like he was a ‘killer’ he had ‘mamba mentality’ he was a ‘cold blooded assassin’ he had a legendary work ethic, etc basically stuff that can’t really be measured.

And if you look at all his GOAT arguments.. there’s really nothing there that should cement him as the GOAT.

And his fanboys always have the same arguments which are not really arguments for GOAT at all. Let me break it down. For example, let me reference some of the answers here on Quora from Kobe fanboys who think he’s the GOAT and break it down (this is just Quora, there’s WAY more Kobe fans in other parts of social media that will argue with similar arguments): 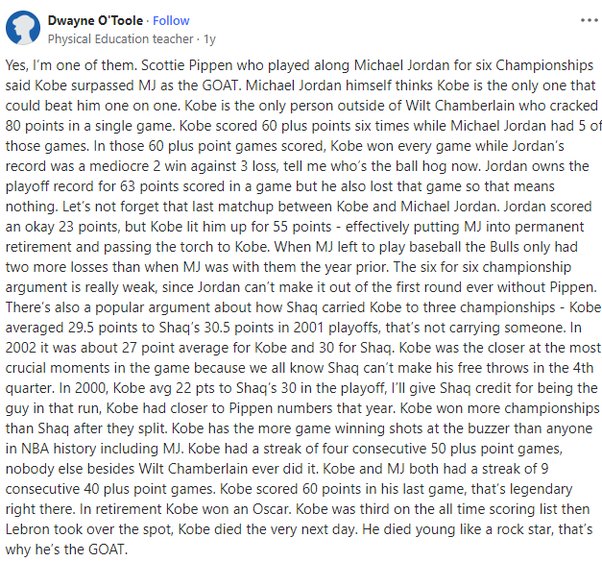 Here’s an answer that was posted for this question, let’s break down why it’s full of misleading statements and misinformation.

“Scottie Pippen said Kobe surpassed MJ as the GOAT” – no he didn’t. A lot of Kobe fans use the ‘player X said that Kobe was the GOAT so he must be the GOAT’ because they ran out of concrete reasons for why Kobe should be the GOAT and instead have to rely on other people’s opinions without doing any in depth research themselves. Or they make stuff up or take them out of context. Pippen never said this, in fact in recent interviews he’s said Lebron surpassed MJ as the GOAT, and in other interviews he’s said MJ was still the GOAT and in other interview’s he’s said Wilt is the GOAT. He’s never said Kobe as far as I know and he changes his mind all the time. 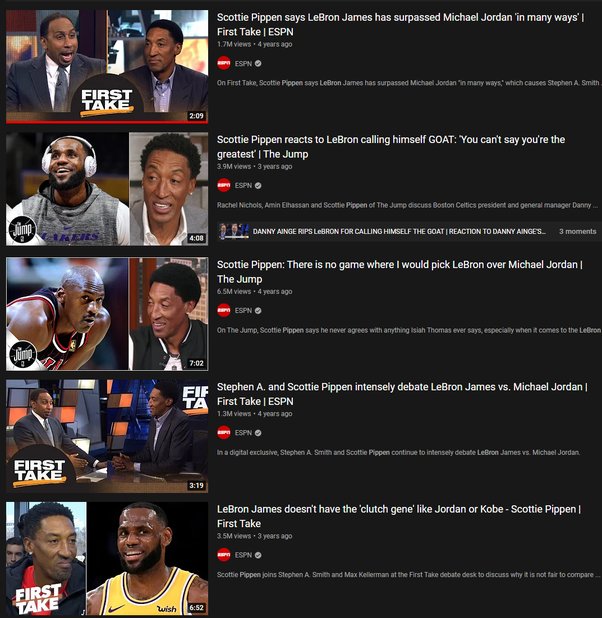 Here’s a bunch of videos where Pippen said MJ or Lebron was the GOAT. Never said that Kobe was better than Jordan.

“Michael Jordan says that Kobe was the only one who could beat him one on one” – What does this have to do with being the GOAT? 1v1 isn’t how the NBA is played. and Jordan said he only said that because Kobe stole all his moves. Let’s not forget that Kobe was 5% less efficient than Jordan using those same moves.

“Kobe scored 81 points, 60 points in X games etc Jordan didn’t and lost the game when he scored 63 in the playoffs…” – Context matters here. The irony is that he said that scoring 63 points and losing is ‘meaningless’ when it was a playoff game vs the ’86 Celtics, one of the greatest of all time. Kobe scored 50/60 point games all in the regular season, so you tell me which one matters more. All of Kobe’s best games were in the regular season, where he had a green light to take more shots than anyone else in NBA history, against a mix of good and bad teams.

“The last matchup between Kobe and Jordan, Jordan scored 23 and Kobe lit him up for 55” – Jordan was a 40 year old and Kobe was in his prime. Talk about misleading. And some random game doesn’t determine who’s GOAT.

“Shaq didn’t carry Kobe in the playoffs” – I agree with this.. in 2001 and 2002. In 2000, Kobe was definitely closer to being carried, especially when he averaged only 15 PPG in the Finals and was out for half the Finals due to injury. But it doesn’t mean Shaq wasn’t the best player on the team. He still was.

“Kobe had more championships without Shaq” – He also needed Phil Jackson and a bunch of rebounding bigs for those. Also.. context. Shaq went to the Finals in 1995 and had to face Hakeem Olajuwon and Clyde Drexler. Kobe went to the Finals in 2009 and 2010 and had to face Dwight Howard and a bunch of older Celtics guys. And Shaq had Brian Winters as coach of that Orlando team while Kobe had Phil Jackson. It’s not really the same.

“Kobe won an Oscar” – has nothing to do with basketball.

And then he goes on about the number of 50/60 point games Kobe had in the regular season again. Always the same arguments. 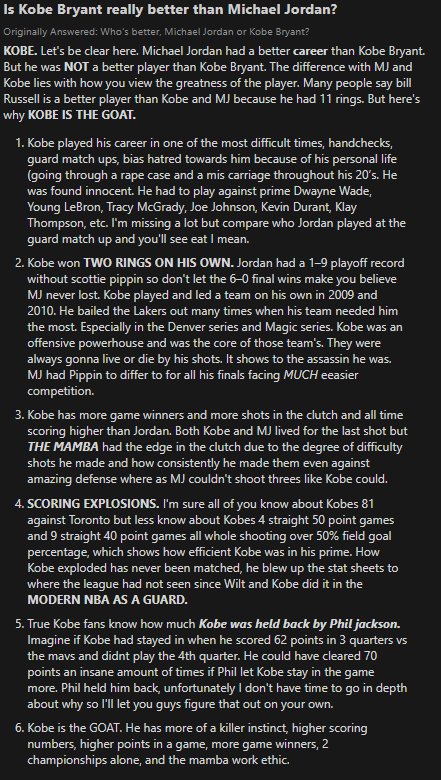 Here’s another poster on Quora with a bunch of misinformation and lies for his Kobe case.

“Kobe played in one of the most difficult times with handchecks, guard matchups, rape case etc” – first of all using the rape case as a POSITIVE for his GOAT argument is ridiculous. Secondly, half of Kobe’s career was post hand checking (2005 onwards), and yes Kobe had to face a lot of great guards.. so did Jordan. Jordan had to face some of the best defensive guards of all time in Dennis Johnson, Joe Dumars, Michael Cooper, Mookie Blaylock, Gary Payton, Alvin Robertson, Sidney Moncrief, Maurice Cheeks etc that’s a whole lot of All-Def teams he had to face there. Kobe never had to deal with Pistons Bad Boy level of physical play like Jordan.

“Kobe won TWO RINGS ON HIS OWN” – Ridiculous. Before Pau Gasol joined the team, Kobe was getting bounced out of the first round and/or missing the playoffs.

“SCORING EXPLOSIONS” – yeah.. already talked about this. Regular season only. Whatever. Fact of the matter is Kobe only had ONE Finals out of 7 where he averaged 30+ PPG. Just one. So for all his ‘scoring explosions’ it didn’t really happen on the biggest stage.

“Kobe was held back by Phil Jackson” – flat out ridiculous. Phil Jackson gave him the biggest green light out of any superstar, proof of that is how many shots he took in that screenshot I posted above. Phil let him shoot more than anyone. But because of one game where Kobe scored 62 in 3 quarters and rested than this Kobe fanboy has to go out on Phil because of it? lol do you know how many 4th quarters Curry and Harden and Klay and KD had to rest because it was a blowout and they didn’t need to stay in the game to pad their stats like Kobe?

“Kobe is the GOAT he has killer instinct, higher points in a game, more game winners, 2 championships alone, mamba work ethic etc” – All either false, misleading or marketing buzzwords. 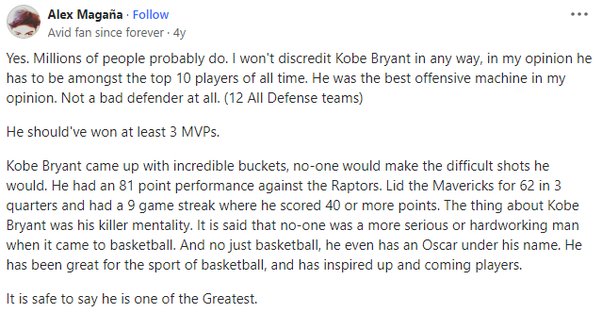 “Kobe had 12 All-Def teams so he must be one of the greatest defenders” – Phil Jackson said in his book The Last Season that Kobe’s All-Def was undeserved.. and I’ve never seen Kobe lock down anyone.

See all the guys that scored on him? lol

“He should have won at least 3 MVPs” over who? 2000–2002 Shaq was the best player on the team. 2003 he got beat by Duncan the MVP winner in the playoffs. 2004 he had 4 Hall of Famers on his team so that was a tough sell. 2005 he missed the playoffs. 2006 he blew a 3–1 lead to Nash the MVP winner even though Suns were missing Stoudemire and Odom was doing very well against Marion. 2007 he lost in 5 against the Suns which now had Stoudemire back. Even 2008 I don’t think he should have won it because the only reason the team did better than 2007 is because they got Pau Gasol. It’s not like Kobe’s performance improved. 2007 Kobe averaged 32 PPG and 2008 Kobe averaged 28 PPG. So he decreased his scoring and the team improved.. sounds about right. 2009 and onwards Lebron was just better in every way.

“difficult shots, incredible buckets, killer mentality, 81 points etc” – yeah this is all stuff from regular season highlights. So what. If Kobe scored 81 points in a Finals game or playoffs game then talk to me about it. Not against a shitty Raptors team in the regular season. and the same usual marketing buzzwords stuff. Kobe has never had the 63 point playoff game Jordan had in the 1986 playoffs against one of the greatest teams ever nor the 48 point special in 2007 playoffs where Lebron scored the last 29 out of 30 points for his team against a 53 win Pistons team. Talk to me when Kobe does that kind of stuff in the playoffs.

Also, note that whenever I bring up any of Kobe’s failures (i.e 2004 Finals, 2005 missed playoffs, 2006 blew a 3–1 lead to a Suns team missing their second best player, 2008 Finals, 2011 got swept by Mavs etc), Kobe fans always excuse it away with ‘he was injured, he had drama, his team sucked etc’ so somehow he gets all these excuses when he underperforms and yet is still the GOAT? lol. GOAT level players don’t need excuses. They just get things done.

See how I can debunk these Kobe fan’s arguments on why he’s the GOAT?? It’s always based on misleading information, taking things out of context, marketing buzzwords or just flat out lies.