Why is Kobe Bryant left off most people’s lists of the top 5 greatest basketball players of all time?

Well, what makes him top 5 all time?

The only argument you have for Kobe being top 5 all time is if you only care about scoring and rings and that’s it. After MJ with 30 PPG and 6 rings, Kobe has 25 PPG and 5 rings. No other player has more than 25 PPG with more rings. Kareem comes the closest with 24 PPG and 6 rings.

But really that’s a very shallow way of judging a player right? Just looking at one stat and one award category? 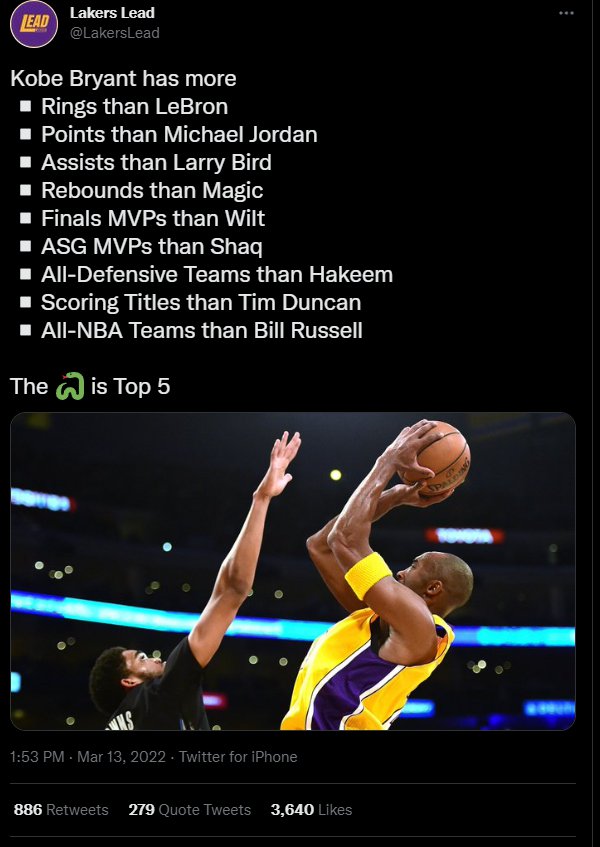 (FYI nearly all the casuals talk about him in the GOAT convo so that article is totally wrong.)

So let’s break down Kobe’s top 5 argument here going by that popular tweet.

-Kobe has more rings than Lebron – ok? but Lebron had more as the best player. and I seriously don’t value Kobe’s 2000 ring where he averaged only 15 PPG in that Finals and injured for most of it, the same level as his other rings.

-Kobe has more Finals MVPs than Wilt – technically not true, because Finals MVPs were not given out in 1967 when Wilt won his first ring. Wilt definitely would have 2 Finals MVPs if they were given out back then.

-Kobe has more ASG MVPs than Shaq – well if ASG MVPs were important, Bob Pettit should be a lot higher on people’s lists cause he tied Kobe with 4

-Kobe has more All-Defensive teams than Hakeem – Kobe’s All-Def selections have always been questionable. There’s lots of articles on this but I think what really stands out is Phil Jackson himself saying that Kobe didn’t deserve All-Def in his book The Last Season. That’s his own coach saying that!

-Kobe has more scoring titles than Duncan – well Duncan’s main job wasn’t to score, Duncan was a great scorer but he never cared about putting up points, he just focused on winning period. And it’s actually no surprise Kobe scored more points when you consider how many FGAs he took:

I mean he easily had the most total shot attempts out of anyone in modern NBA history. and also the most misses too.

So it’s all just cherry picking. Note they don’t talk about MVPs since Kobe only has 1.

I can do the same thing for oh.. let’s just pick a name.. John Havlicek.

See how I can do the same thing for John Havlicek? And nobody would say he’s top 5 all time right?

Kobe’s not top 5 because his body of work isn’t top 5. Jordan, Kareem, Lebron, Duncan, Magic, Wilt, Russell. There’s at least 7 names ahead of Kobe that goes ahead of him in total body of work (stats + awards). The highest Kobe can go is number 8, that’s it. Unless you want to argue rings + PPG matter more than any other stat and award, at which point I will call you out as a casual because ALL awards and ALL stats matter not just cherry picking the things that Kobe has going for him. Not to mention advanced analytics pretty much all hate Kobe too.

And no, his 81 points or 62 in 3 quarters or any of his other ‘scoring explosions’ doesn’t mean he’s top 5. Harden, Barry, Baylor and many other dudes averaged more than 35 PPG before and nobody would ever use their ‘scoring explosions’ as reasons why they are GOAT. And in the regular season no less. Who cares about how many points u score in some regular season game? Giannis had 50 points in the closeout Finals Game 6. KD had a 49 point triple double in the playoffs coming off an Achilles tear. Nobody putting them top 5 all time.