Why is China upset that Pelosi plans to visit Taiwan?

The timing, I think.

We are at a time right now where it is basically the Cold War 2.0. Instead of the Soviet Union, it’s China that’s the main enemy of the USA right now. And for China, the main enemy is the USA. Obviously, visiting Taiwan or acknowledging Taiwan in any way will get China riled up. Although numerous US representatives have visited Taiwan in the past, the difference is now China has become more nationalist than in the past under Xi Jinping’s rule, and the USA was not the main enemy of China back in 1997 when Newt Gringich visited Taiwan; now the USA is painted as the enemy of Chinese.

Proof of that is the numerous Chinese on Western social media who love to paint the USA in a negative light.

We can easily see this on numerous Quora answers about China – the top upvoted answers are always pro-Chinese and anti-American or anti-Western. But it’s everywhere on Western social media too. 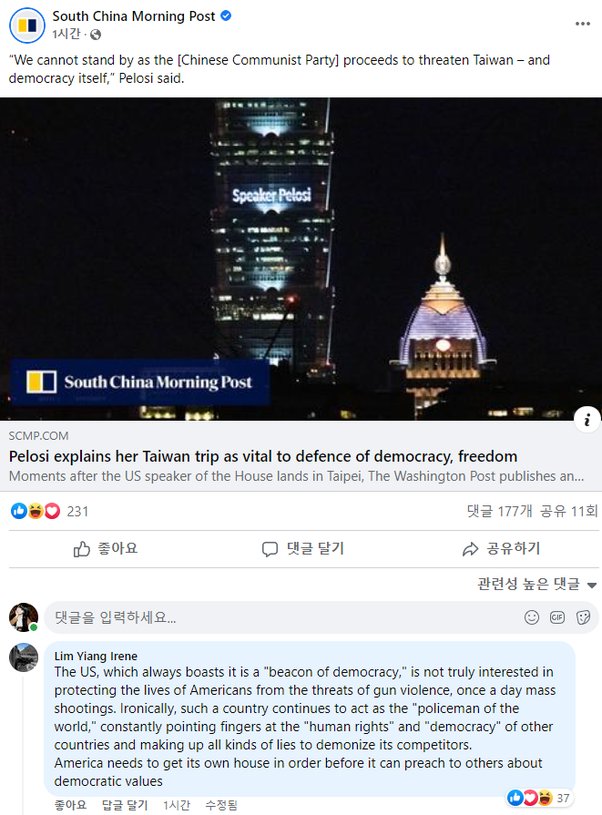 So notice how the top comment here has NOTHING to do with Pelosi visiting Taiwan? This Chinese poster just takes any opportunity to take shots at the USA.

And now China doesn’t even acknowledge that HK was ever a british colony anymore.

I wonder, since they rely on the UN argument so much (Taiwan not a country because UN said so, HK not a colony because UN said so etc), would they acknowledge that mainland China was actually considered part of the ROC until 1971 (because RoC was considered the rightful ‘China’ when UN was established) when PRC took ROC’s seat in the UN? But I bet that’s not what the textbooks say in China right?

So there’s lots of revisionist history going on in China now. My father, who lived through the Cultural Revolution, can attest to this. He knew that back in the Mao era, capitalism was considered to be evil, leading to corruption by the Western imperialists. Capitalism was demonized by Chinese back in the 1960s and 1970s, just like what the Soviet Union thought about capitalism back then too.

But then Deng Xiaoping took over and in the 1980s China became – wait for it – capitalist! And now China has capitalism to thank for raising their standard of living, growing their economy, creating private enterprises and businesses etc. So now capitalism is considered a great thing for China, or what they call is ‘socialism with Chinese characteristics’ but we all know it’s capitalism. The only difference is the state has a heavier hand in regulating businesses in China compared to other capitalist countries.

So there’s a complete 180 degree turn by China on the subject of capitalism. That’s revisionist history.

You’re about to see more revisionist history from China many times:

-In the 1960s, SK was an enemy of China, they were closer allies in the 90s, 00s and early 10s, and in the Xi Jinping era relations have been more rocky as China has become more nationalist in the past and now accuse SK of ‘stealing’ Chinese culture

– USA was demonized by China in the 1960s, then considered more of a partner in the 1990s and 2000s, now demonized again. USA are called warmongers by Chinese even though they haven’t started any new wars since 2003 (and back then no Chinese was talking bad about USA).

-HK was considered part of the British Empire until it was handed back to China lawfully in 1997, now they can revise the history to make it seem like they were never part of the UK

For example China established ARAT for diplomatic relations with Taiwan, and Taiwan was previously more committed to a policy of ‘eventual unification’ with China. Now both sides have a mutual dislike of each other, as China ramps up it’s militarism and nationalism in recent years.

As far as I can tell, China has become increasingly more nationalistic in the last decade under Xi Jinping, which creates frosty relations with not only Taiwan but virtually every developed country as China becomes more protectionist and more arrogant. (Currently China has made enemies of every country except for third world developing countries and Russia). Xi Jinping’s ‘China first’ policy has had negative consequences that are similar to Trump’s ‘America first’ policies.

Trust me when I say under Jiang Zemin and Hu Jintao, China was not like this. This means that anything dealing with Taiwan or other sensitive subjects is liable to infuriate China and Chinese at this time. And if Chinese really want to start a war over a US official visiting Taiwan, well then are they any better than the US warmongers that they so passionately criticize all the time?