Why does the media love Lebron James so much?

We need to be clear about something here, the media loves talking about Lebron, whether positive or negative is the more accurate statement.

Because the media actually loves to rip Lebron all the time 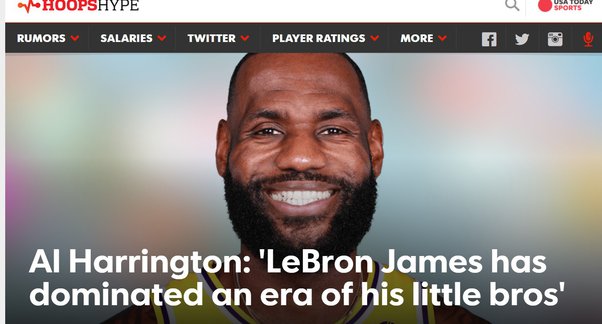 Literally anytime anyone says anything that could be considered controversial about Lebron, the media makes a habit of putting it out there as clickbait. Lebron is the only player really that gets treated this way.

Every other great player (except for KD because he joined a 73 win team and now his Nets superteam is failing), Curry, Dr J, Kareem, Jordan, Kobe, Bird, Magic, Duncan, Hakeem etc you NEVER hear anything bad about them in today’s media. Today’s media has massive respect for older legends and for popular current players like Curry and Giannis so they’ll never post anything negative about them. But because Lebron is so polarizing, the media has the habit of constantly posting about Lebron whether positive OR negative, and that’s why Lebron shows up in your feeds a lot. Anytime Lebron says something, social media goes crazy over it, and inevitably he gets criticized by a lot of people and media talks about it, rinse wash repeat and that’s why you see media talk about him a lot. He’s the only player that has an equal amount of haters and fans so the media will appeal to both. For every Nick Wright out there (a “bronsexual”) you’ll have his polar opposite in Skip Bayless (a bron hater)