Who was better, Bob Pettit or Elgin Baylor? 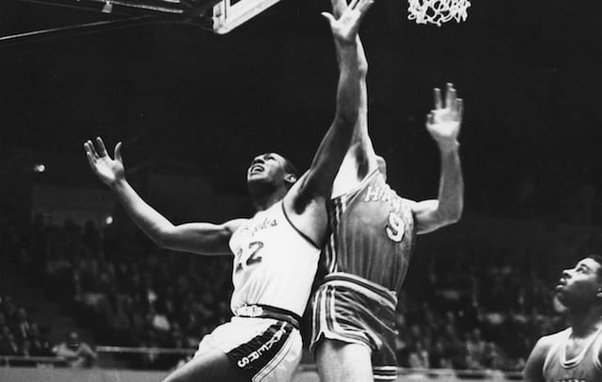 This is actually much closer than people think. Many people think that Baylor is much more adaptable to the modern NBA than Pettit and Pettit unfairly gets grouped along with the other 50s guys, when he deserves much more respect than that.

Rebounding wise, while Baylor was a very good undersized rebounder – he averaged 13.5 RPG despite being 6′5 – Pettit averaged 16 RPG (3rd highest all time). This despite Pettit not being as athletic as Baylor. Pettit is also one of only a few players to average 20 RPG in a season (Jerry Lucas, Nate Thurmond, Wilt and Russell are the other players). For a 6′9 guy that wasn’t particularly athletic, that’s incredible. Pettit is probably one of the greatest rebounders in NBA history, and a very overlooked one at that.

Passing wise, it’s definitely Baylor since he played more SF and had more of a perimeter game while Pettit was a pure PF and thus Pettit didn’t need to pass out of the post very often as much.

Awards wise, it’s interesting because this actually goes to Pettit – he won a championship and in fact was the only player to beat Bill Russell’s Celtics in the Finals. He would have had a Finals MVP if they existed back then – he scored 50 in the closeout Game 6. He also has 2 MVPs while Baylor has none. This is especially telling as Pettit won his second MVP while Baylor and Russell were still in the league, meaning his peers thought Pettit was the more valuable player. Baylor had a lot of All-NBA 1st team selections and that’s about it – and Pettit has that too.

Overall I’m going to have to give it to Bob Pettit. I think Pettit is unfairly forgotten when he actually played in half of the 1960s as well alongside tougher competition and proved he could still get his numbers and be productive with black players in the league. Unfortunately, people group him in with the 1950s guys and that’s not just fair. Pettit could *almost* score as well as Baylor, but he was a better rebounder and also has the championship and the MVPs. He ranks in the top 20 for me, Baylor in the top 25.