Who is the next Kobe Bryant?

Kobe was a product of his time. He came at the perfect time when everybody was looking for the next Michael Jordan so any athletic 6′6 guard was hyped up and billed as the next Jordan. This didn’t work as well for Vince Carter – although Carter had the hops, he didn’t have the array of offensive moves, didn’t have the mentality and wasn’t close defensively.

But then.. there was Kobe. A budding superstar with exactly the same personality as Jordan! He was a relentless, fearless competitor. He had the same array of offensive moves that he stole from Jordan. He had athleticism, he was 6′6, he was a solid defender, and he even had Jordan’s coach Phil Jackson! Kobe was basically a facsimile of Jordan… but the problem is he fell short of Jordan in pretty much every way and was basically just that, a facsimile but not the real thing.

On the surface to casual observers he looked note for note like Jordan. After all, he did the same moves Jordan did right? Well here’s the issues when you look deeper; Kobe didn’t have Jordan’s basketball IQ and natural talents. Yes he was athletic but not quite as athletic as Jordan. He had Jordan’s offensive moves but he used them improperly and forced bad shots way too often whereas Jordan would be a lot smarter about his shot selection. He was a good defender but he was inconsistent and lacked the versatility or effectiveness Jordan had as a defender. He had Phil Jackson as the coach but he often didn’t listen to Phil and wouldn’t abide by the triangle offense and instead opted to play 1v1 too much leading Phil to remark that Kobe was ‘uncoachable’ in his book The Last Season. Phil would never say this about Jordan.

Jordan was able to win without a great second offensive star. Nobody was double or triple teaming Pippen. They were doing that to Jordan. Jordan still averaged 30+ PPG. Kobe during his early years played with Shaq, and Shaq was receiving the vast majority of the double and triple teams. In his later years, he had Gasol to pass to whenever he did get the double team, and Gasol is a much better offensive player than Pippen. Without another offensive star around him, Kobe wasn’t able to win anything unlike Jordan. Another example of their gap: Jordan comes back post retirement, he’s 33 years old, he still does very well against prime Penny Hardaway. With Kobe, post-surgery Suns Penny Hardaway routinely dropped 25 pts on him. Kobe couldn’t stop him. And that was 2001 Kobe, one of his best years! So the gap between Jordan and Kobe, even though they look superficially similar, is about as wide as the grand canyon.

But to the casual observer, Kobe was close enough to Jordan to become as popular as Jordan was in his day. And because of his popularity and his era which had a lot of inefficient volume scorers like Tmac and Iverson, Kobe was able to get away with having the biggest green light out of any superstar.

^ This is the top 50 most FGAs ever, and one name dominates above all else: Kobe. Yes some modern superstars appear like Westbrook, Derozan, Beal, Booker and Harden, but not nearly as often as Kobe.

You see, Kobe’s inefficient volume shooting would absolutely not exist in the modern analytics driven NBA which focuses on efficient scoring.

Here are the players who come closest to Kobe in volume and scoring style, but I’ll add notes for why each are a bit different than Kobe too.

Kobe on the other hand, can’t shoot as well as Tatum or Booker or Harden, doesn’t have PG skills like Harden or Westbrook, and he shot 27 times a game at his peak. So which NBA coach is going to let Kobe play 40 min a game in today’s NBA? probably none.

When you dig into NBA history, you’ll see that inefficient volume shooters have historically not fared very well when it came to winning and is not a winning style of play – Elgin Baylor, Pistol Pete Maravich, Iverson, Tmac, Westbrook, Demar Derozan etc

The soles exceptions are Rick Barry and Kobe. Barry was able to win because in his winning season in 1975 he was one of the best passing forwards in NBA history and that season he trusted his teammates much more. It was also the weakest time in the NBA due to half the talent being in the ABA at the time

For Kobe, the reason he was able to get those 5 rings is because 1) he played under Phil Jackson who forced him to share the ball and 2) he was constantly surrounded by bigs like Shaq, Gasol, Bynum, Odom etc the presence of a dominating force like Shaq, or having not one not two but THREE great rebounders around him in Gasol/Odom/Bynum in addition to having the triangle offense, was able to compensate for his bad shot selection. This is the reason why without either Phil or a team of rebounders, Kobe wasn’t able to get anywhere. Kobe’s Lakers always had a massive size advantage. Lamar Odom was their SF and he was 6′10. Jesus. Luke Walton, Trevor Ariza, Bynum, Gasol, Odom, Artest, you see how many big guys Kobe had around him to help rebound his shots?

So tldr; there is no next Kobe because Kobe wouldn’t exist in the modern analytics driven world, he was way too inefficient, played hero ball too much and had basically the perfect timing and circumstances back in his day (Jordan comparison, Phil Jackson, a team of rebounders) that wouldn’t exist in today’s NBA because the triangle offense is dead and the traditional rebounding big man around the basket is gone.

Edit: Some commenters think I’m ‘hating’ on Kobe and am wrong in ‘every way’ if he can’t play in today’s game or I’m ‘insane’. Yet they have no arguments as to why I’m wrong. If all you got are insults and nothing to back up why I’m wrong, then there’s no point to even say that. and quotes from other players saying how Kobe was great doesn’t count, there’s no analysis there of why he would be good in today’s game at all. Tell me how Kobe would win in an era where it’s all stretch bigs and he needs 3 guys in the post to counteract his playstyle. If you tell someone they are wrong you better tell them WHY they are wrong. I don’t care how Kobe games you guys watched, did you actually compare what he did in those plays to other superstars? Did he elevate his game in the playoffs? Did he lock anybody down? I watched all of Kobe’s playoff games too. It’s not even in the same ballpark as Lebron and Jordan. His best playoff games I can literally count on one hand – 2001 vs the Spurs he had 48/16 game and 2006 vs the Suns he had a 50pt game and 2009 Finals he had a 40/8/8 game. That’s it. That’s all his best playoff games, everything else is pretty underwhelming. 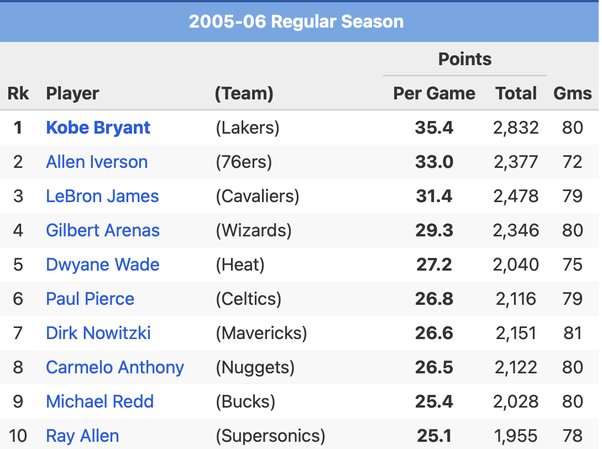 ^ Tell me how this was the toughest era to score points? 2006 is right after league changed hand checking rules and started calling everything for perimeter players. That’s why perimeter stars all had amazing seasons that year. So yeah.. toughest era my ass.

You know what’s a tough era? Guys doing this to you 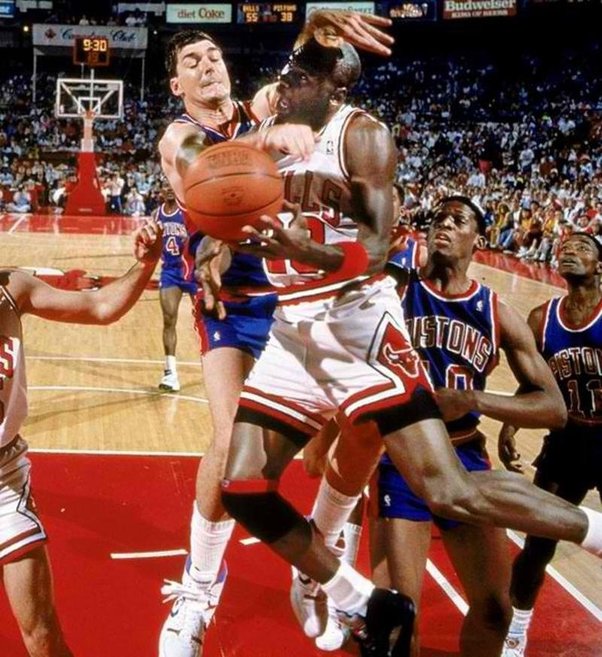 Kobe fans will try to make up anything to make him look better than Jordan or Lebron. Sorry, doesn’t work.

Oh, and this graphic which I see everywhere 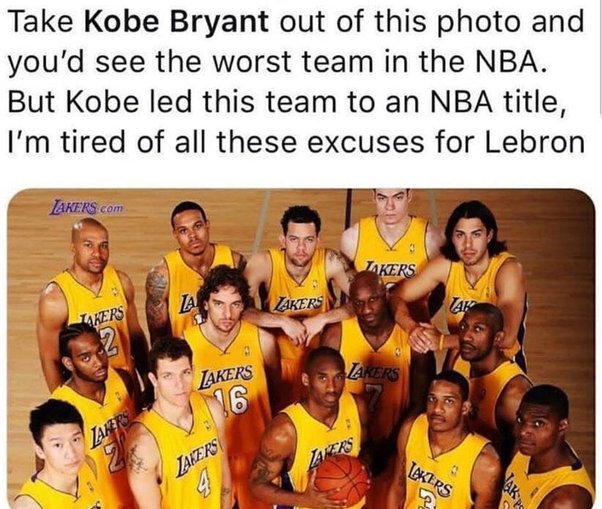 Is such a shameless lie it’s ridiculous. Here’s something most fans wouldn’t know if they dug in:

So Bron had a superteam, and Kobe carried a bunch of scrubs? Yeah right. People just look at the names and not what they actually contributed or did.

Also not to mention I have a mountain of evidence why Kobe’s defense is overrated and not even as good as Lebron’s defense let alone Jordan’s defense.

I am also going to go over a response I had to a commenter who was adamant that Jordan and Kobe’s games were 95% the same. Here’s why they are very different, especially with regards to what they needed in order to win:

Ok but did you actually watch how they played? Even if you watched Jordans or Kobe’s games I’m not sure if you paid attention to the way they played. For example, when Jordan shoots a turnaround fadeaway, he actually creates a lot of space between him and his defender while elevating quite high. Kobe doesn’t do this when he does his turnaround fadeaway he doesn’t create as much space and because he’s not as athletic as Jordan he doesn’t get the same amount of elevation which results in a shot that’s more likely to get blocked. Also, Kobe’s shot selection is far worse than Jordan’s. He over relies on pump fakes and fadeaways way too often. Jordan didn’t even develop his fadeaway until his later years. In his early years his athleticism was so good he could rely on his dunks and his contorting layups and midrange jump shots because he elevated himself so much higher than his peers.

After Jordan, none of the copycat guys like Kobe, Tmac, VC etc could get as much elevation as Jordan could get and wasn’t using Jordan’s moves properly. They all wanted to be like Mike but Mike was special, he was not able to be duplicated that’s the thing. That’s why these guys in the 2000s all shot much lower percentages than Jordan did, they didn’t have Jordan’s ability to get his shot off so they weren’t as efficient. That’s also not to mention that Jordan was a very willing passer if he needed to be, in fact Jordan actually could and did play PG at one point in the late 80s and had 10 triple doubles within his first dozen games. Kobe didn’t have this ability, even if he trusted his teammates (which wasn’t that often), his passing simply wasn’t at the same level.

The part of Kobe’s game that really is a bad influence though is the fact he forces his shots so often and even through a double or triple team wouldn’t pass to Kwame or Luke Walton even if those guys were open. These are basic basketball decisions, you always pass to the open man. Even when Stacey King was on the court, Jordan would still pass to him if he was covered. No matter how ‘bad’ his teammates were whether it be Brad Sellers or Dave Corzine or Sam Vincent, Jordan would still pass to them and make the right basketball play. Kobe sees Smush and completely ignores him that’s a big issue. In team basketball you have to be able to trust your teammates. People don’t understand that his first 3 rings that he won is when he was still young Kobe and was ok deferring to Shaq but once he wanted to ‘be the man’ more starting in 2003, they don’t win anymore. He was still this way in 2008 when Lakers started contending again but he’s able to get away with this with a perfect complement of star big men that’s willing to grab his garbage baskets for him. Jordan never needed this. He’s won with great rebounders like Dennis Rodman and Horace Grant but also with mediocre big men like Will Perdue, Stacey King, Luc Longly etc that’s a HUGE difference between Kobe and Jordan is what kind of supporting cast they needed. Jordan’s best rebounding teammate in 1991 was Horace Grant with 8 RPG. That’s equivalent to Kobe’s *third* best rebounder on his later teams with Andrew Bynum. These are just the facts if you watch them play there’s a clear obvious difference between how they play and what kind of supporting cast they needed to win.