Who is a better scorer, Kobe or LeBron?

But you see, this doesn’t work in the playoffs. In the playoffs, the game slows down, the defenses get tighter, the opponents get better and it becomes harder to score on volume like this.

That’s why in the playoffs, Kobe’s high is only 50 points – which was against the Suns who were not a very good defensive team. His Finals high is in 2009 with only 40 points.

Now, contrast this with Lebron James.

Lebron’s playoff high is not much higher than Kobe’s – only 51 (also his Finals high btw) – but he puts up higher averages much more consistently than Kobe does.

Let’s take a look at the Finals, which is the biggest series in the playoffs: 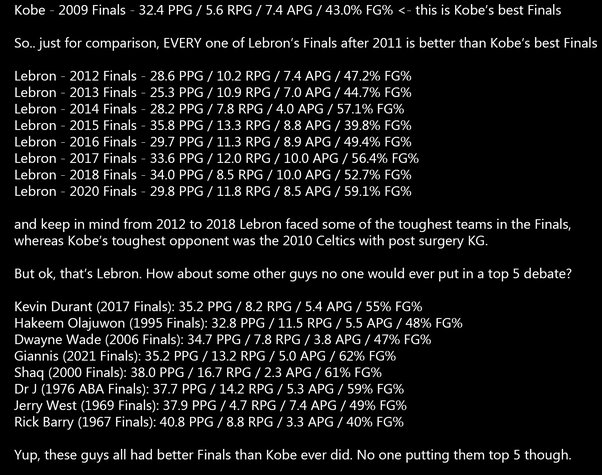 In addition, Lebron outscores Kobe in elimination games by over 11 PPG and 4% better efficiency.

And of course, Lebron just averages more in the playoffs in general. 28 PPG compared to Kobe’s 25 PPG. So for all these reasons Kobe might give u higher regular season numbers but I’ll take Lebron in the playoffs.