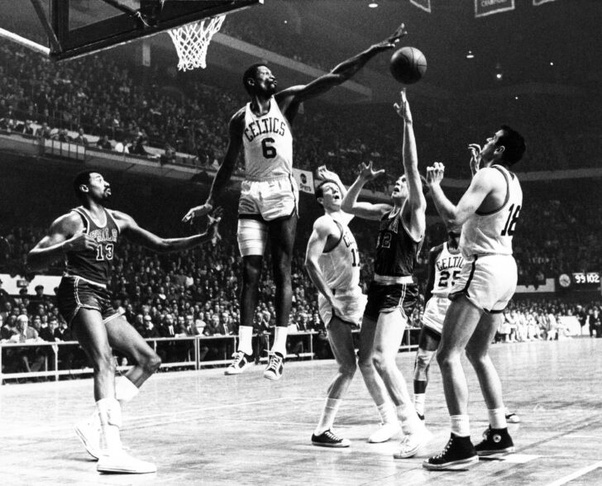 looking at his 15 PPG you can’t adequately judge how great a player he was.

Sure he grabbed 22 RPG which shows a bit of how great of a defensive player he was, but since blocks weren’t counted back then, it’s hard to accurately measure just how much of an impact he had just based on stats.

Russell’s intangibles was giving his team an incredible morale boost and the opposing team a stifling sense of intimidation due to his defensive ability. Russell didn’t actually need to block every shot, he just needed to threaten to block every shot – and you can’t measure that. How many points did he prevent the other team from scoring just from his presence alone? The other team would be too scared to shoot sometimes just because they were afraid Russell might be there. That stuff doesn’t show up on the stat sheet. Even today, that kind of statistic doesn’t show up well. blocks only measure times the opposing team shot and it was actually rejected by the player but it doesn’t measure how many points were saved because the opposing team was too scared to shoot thinking that the defensive player would just block it.

Russell’s defensive intimidation tactics were a HUGE intangible, you can’t measure it, and yet his 11 championship rings and winning 5 MVPs (including one over Wilt who averaged 50 PPG that season) are proof of how valuable he was

When you win MVP averaging 18 PPG over a player who averaged 50 PPG, then you must be doing ALOT that isn’t showing up on the stat sheet.

I would also add a lot of defensive players by the same logic, do not have the stats backing them up but everyone who watched them play knew how valuable they were – guys like Wes Unseld, Dennis Rodman, Nate Thurmond, Ben Wallace, Dikembe Mutombo, Bobby Jones, Bruce Bowen, Rudy Gobert, Mark Eaton, Tyson Chandler, Tony Allen, Michael Cooper etc didn’t have eye popping stats but their defensive presence was a huge intangible

Go confidently in the direction of your dreams. Live the life you have imagined.