What are fun facts about Kobe Bryant?

I think the thing that surprised me the most when I did more research into Kobe is how underwhelming he was in the playoffs and Finals.

^ I’ve already talked about how overrated Kobe was as a defender, but when it came to offense, I remember telling my friend a few years ago (who has watched virtually every NBA playoff game since the 1980s) Kobe must be one of the greatest scorers ever right? I mean.. everyone says so! They always bring up all the 50/60 pt games he had, the 81 point game, the 62 in 3 quarters etc..

And my friend just looks at me and says “Have you ever watched Kobe’s games in the playoffs? Have you watched ALL the games? the ENTIRE games?”

And I admit I hadn’t watched all his games. And when I went through his games, I realized.. Good god. Kobe is also an overrated scorer too!

That Finals graph was just proving that Kobe’s Finals games have always been just good not great. He has 1 Finals out of 7 where he averaged over 30+ PPG. He averages 40% FG% in those Finals too.

Kobe fans might have some things to say about this. But those guys played in more Finals games! Nope most of them didn’t. Except for West, Baylor, Kareem, Lebron and Sam Jones, the rest of them played in less Finals games and had more 35+ PT games. But those guys had weaker competition! Well that’s not true either – Kobe’s Finals opponents were some of the weakest ever (2001 76ers, 2002 Nets, 2009 Magic) since they came from the weaker Eastern conference. But those guys played in faster paced eras! Well Wade, Lebron and Shaq played in the same era. Shaq even on the same team. But Kobe wasn’t the main player for his first 3 championships! Exactly. So why is Kobe often ranked ahead of Shaq as a scorer? hmm.

These are probably his best games. There’s only a handful of them.

What’s Kobe’s best playoff run? His highest playoffs PPG was in 2007 when he averaged 32 PPG for a single round.

^ Full list is here. There’s at least 15 players who averaged 34+ PPG in the playoffs – that’s 2 PPG higher than Kobe’s highest playoffs PPG. There are even more than that if we extend it to 32+ PPG.

What about playoffs points high? 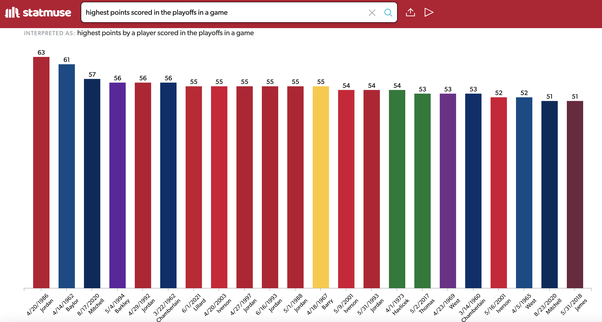 So how can Kobe be on the mount rushmore of greatest scorers of all time.. when 12 players have more 35+ PT games in the Finals, numerous players have higher peak playoffs PPG than him, outside the top 20 of highest playoff point games, and at least 7 players have better playoffs PPG leading to a title?