Should Kobe be more in the conversation as the greatest of all time rather than LeBron James?

Tell me, what’s Kobe better at than Lebron? Ok so he has more scoring titles, he has one more ring and more All-Def selections. All of those are questionable since his scoring titles are because he took more shots than anyone else in the league, he has one more ring because he played with a guy called Shaquille O’Neal and he has more All-Def because the media gave him a lot of freebies based on reputation rather than merit (seriously, which superstar did Kobe consistently lock down in his prime? and even Phil Jackson said those were undeserved in his book The Last Season).

Kobe’s greatness is more based on hearsay and reputation than actual facts. There’s a reason why Kobe fans only talk about his regular season scoring – because he doesn’t have quite as many ‘scoring explosions’ in the playoffs. There’s a reason why they always bring up quotes from other NBA players talking about his greatness instead of game winning plays in the playoffs, it’s because Kobe is a much better 1v1 player than he was a team player, and as a result most of the time in the playoffs what you’ll see is Kobe dragging the team down sometimes as much as he puts them ahead. There’s a reason why Kobe fans always talk about the same games (62 pts in 3 quarters, 81 pts etc) or that one quarter vs Spain in the 2008 Olympics or that Game 4 when Shaq fouled out in the 2000 Finals it’s because he has only a handful of great moments that get deified and replayed over and over again.

Here’s what Lebron has done in the playoffs that I’ve never seen Kobe do:

-Have more than one buzzer beater in the playoffs (Lebron has 5, Kobe has 1)

-Win without a star big man and in fact win with both interior stars (AD) AND perimeter stars (Kyrie, Wade)

-average a 30 point triple double in the Finals

-lead both teams in EVERY statistical category in the Finals

-Be the Finals MVP for every championship he’s won

-Have the most playoff wins out of any player 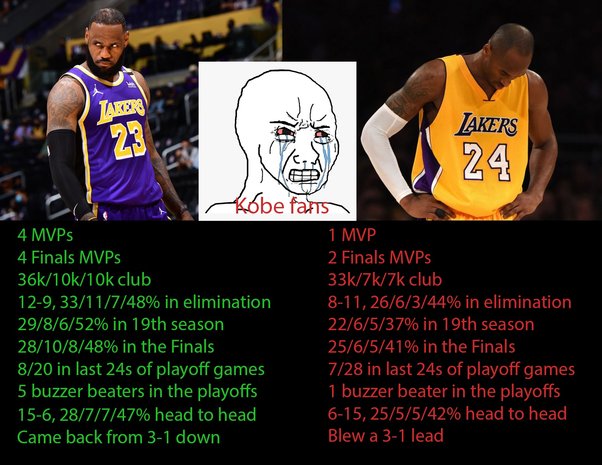 Edit: seems like a couple of Kobe fans couldn’t handle the facts and had to resort to their slander and misinformation about Lebron 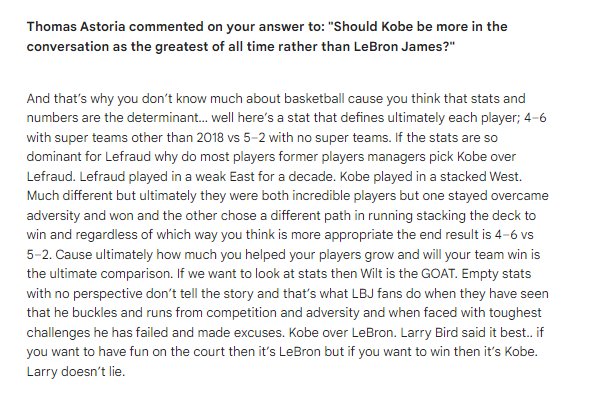 This comment is full of the typical misinformation and lies. When I responded to him, he got butthurt and asked Quora to delete it.

Let’s go through each of these ‘arguments’ because all of them are easily debunked.

uhh no, actually Lebron’s stats is IN ADDITION to how much value he adds to a team. Proof of this is when Lebron left the 2010 Cavs they went from a 61 win team to a 19 win team, with the main roster still intact. They still had Mo Williams, Anderson Varajeo, Antawn Jamison etc all their main starters except for Lebron but they lost 40 more games. When he left Miami, same thing they went to a middle of the pack team when Wade and Bosh was still there. Yes Wade and Bosh were not in their primes anymore but that’s further proof that they were already declining when Lebron was playing with them. When he left the Cavs the second time, they went from a Finals team to a 19 win lottery team again. This is CP3-level impact and we have clear evidence for it, it’s not related to his stats, but in addition to his stats.

“here’s a stat that ultimately defines each player: 4–6 with superteams vs 5–2 with no superteams”

So Lebron is actually 3–2 in the Finals when he had a superteam and 1–4 when he didn’t.

“why do most former players/managers pick Kobe over Lebron?”

Most players have Jordan first (by far), then Lebron, then Kobe. In that order.

“Lefraud played in the weak East for over a decade, Kobe played in a stacked West”

Here’s the interesting thing.. two teams from the EAST beat Kobe in the Finals.. the 2004 Pistons and 2008 Celtics, both of which were in the Lebron era. In addition the 2006 Heat also won the championship. So 3 different teams from the East won during the 2000s, how weak was it? So in the 2000s we can establish at least the Pistons, Heat and Celtics were contenders during that time.
Then in 2010s, Lebron went through a 62 win Bulls team, a 60 win Hawks team, TWO different 56 win Celtics teams (a Tatum/Brown version and a Big 3 version), a 56 win and 59 win Raptors team and a 56 win Pacers team. Then he beat a 58 win team and a 70+ win team in the Finals.

Kobe from 2008–2010 didn’t beat a single 60+ win team either in the playoffs or the Finals. He beat teams that were right on the verge of 50 wins i.e the Boozer/Williams Jazz, Melo Nuggets, Tmac/Yao Rockets. They were not Finals contenders nor were they better than Kobe’s Lakers. The only team that really challenged Kobe’s Lakers were the Nash/Stoudemire Suns teams. That was the only legit good team from the West that Kobe faced. The rest were 50 win teams that were 2nd round teams at best. That’s why when Kobe fans say he beat the most 50+ win teams, they cannot raise it to 55+ wins it has to be 50+ because a lot of those teams barely made 50 wins.

People forget that Kobe wanted out unless the Lakers gave him an all star which the Lakers did in Pau Gasol. That’s why he didn’t leave. And mind you, it was 3 years of Smush/Kwame that Kobe couldn’t handle and he also had Lamar Odom who was a solid player.

Lebron on the other hand, played out his 7 year contract with guys like Larry Hughes, Sasha Pavlovic, Zydrunas Ilgauskas, Mo Williams, Drew Gooden, Eric Snow etc and never asked for a trade.
And keep in mind.. Bosh never got past the first round before Lebron. Kyrie and Love never sniffed the playoffs before Lebron. So.. ‘stacking the deck’? really? with guys that never made the playoffs before?

“ Empty stats with no perspective don’t tell the story and that’s what LBJ fans do when they have seen that he buckles and runs from competition and adversity and when faced with toughest challenges he has failed and made excuses.”

You don’t run from competition when you go to 8 Finals in a row, buddy. If LBJ had ‘empty stats’ and ran from competition, he wouldn’t be averaging 33 PPG in elimination games or having the most playoff wins of all time or having 5 playoff buzzer beaters.
The irony is that Kobe’s best games were all regular season – the 81 pts, 62 in 3 quarters, 60pt last game etc when none of that mattered. His playoff high is 50 …and he lost that series. So talk to me about empty stats when you chuck up 50 shots in a game that doesn’t matter. Real empty stats is Tmac when he played in Orlando and couldn’t get past the first round despite having all those stats. That’s real empty stats. Not when you take a team with your second best player Larry Hughes to the Finals. That cannot be empty stats.

Nope, Larry doesn’t lie. But Kobe fans do. Because he never said this.

He said Lebron was more dominant, but he would rather play with Kobe. He never said Kobe was better than Lebron. So it’s a total lie that Kobe fans spread.

And Kobe is the REAL fraud. He is so called ‘elite defender’ when I’ve never seen him lock anybody up. Guys like Gilbert Arenas, Allan Houston, Jeremy Lin etc all got their career highs on him. Paul Pierce, Rip Hamilton and Jalen Rose outplayed him in the Finals before. He is so called ‘unstoppable scorer’ but I’ve seen guys like James Posey, Tayshaun Prince, 38 year old Jason Kidd, Shane Battier etc all lock him up before. He so called ‘bleeds purple and gold’ and yet he asked to be traded when the going got tough for him. He is so called ‘clutch’ but he averages 22 PPG in elimination games, is 8–11 in those games, and is 7/28 in last 24s of playoff games. He has 1 playoff buzzer beater in his whole career. Kobe’s the real fraud here.

Allan Houston 53 on the Lakers

Lebron destroyed Kobe most of the time they matched up

See.. that’s why Kobe is the biggest fraud I’ve ever seen.