In your opinion, who is the more overrated player: Hakeem Olajuwon or Kobe Bryant? Why? What do you not like about them that makes them overrated in your mind?

Kobe is overrated and Hakeem is underrated.

I’ve already written a lot about why Kobe is overrated but let’s talk about why Hakeem is actually underrated. 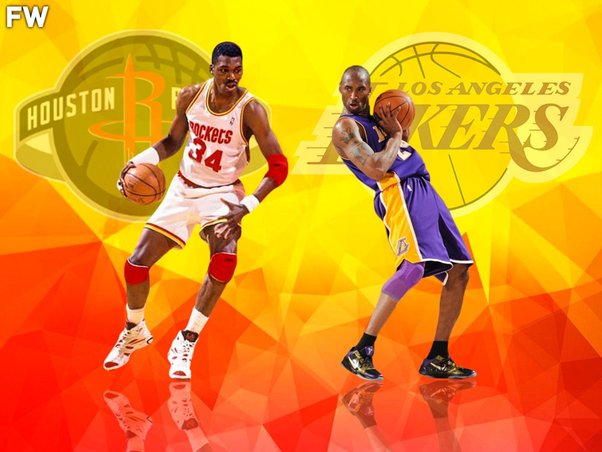 -Hakeem made the Finals in his second year in the league with his only other all-star teammate being Ralph Sampson and took the 1986 Celtics (one of the best all time) to 6 games.
-Hakeem is easily a top 5 defender of all time and the all time leader in blocks
-Hakeem is also the only center top 10 in steals
-Hakeem won back to back championships with very little help – only Otis Thorpe and Clyde Drexler being his best teammates during that time – and a good but not great coach in Rudy Tomjanovich
-Hakeem destroyed all his competition en route to those titles. 1994 goes through Drexler, Barkley, Malone, Stockton and Ewing. 1995 goes through Malone, Stockton, Barkley, Robinson and Shaq. That’s some ridiculous competition he faced.
-Hakeem averaged 33 PPG in the 1995 playoffs en route to the title and 37 PPG in his highest scoring playoff run in 1988. For comparison, Kobe’s best average resulting in a title was 30 PPG in 2009 and 32 PPG in his highest scoring playoff run in 2007.
-And let’s remember, the fact that Hakeem won 2 titles, 2 fmvps, 1 mvp, 2 dpoy, and went to 3 Finals all while having a grand total of 3 all-star teammates his entire career (Sampson, Thorpe, Drexler), only one of which was really HoF level (Drexler) is nothing short of amazing.

There’s an argument to be made that Hakeem is better than Kobe, yet you have people who put Kobe in the GOAT convo and Hakeem outside the top 10. That’s why Kobe is overrated and Hakeem is underrated.