How many regular season MVPs should Kobe Bryant have won?

To be honest, none.

When was Kobe ever the undisputed clear cut MVP in the league? We can go really year by year.

1997–2002 – there’s no way Kobe would have won MVP since Shaq was the better player on the team by a clear margin during this time.

2004: Kobe averaged 27/6/6/44% that year. He was 5th in MVP voting (yes even Jermaine O’Neal and Peja Stojakovich got more MVP votes than him that year!). Lakers won 56 games that year but it’s hard to be MVP when you’re on a team with 3 other Hall of Famers on it though (that year Lakers had Malone and Payton in addition to Shaq and Kobe). Kevin Garnett won it (and deserved it) that year in his best individual season of his Timberwolves career, leading his team to 58 wins, averaging 24/14/5 and leading his squad (all he had was old Sam Cassell and Latrell Sprewell) all the way to the WCF.

2006: Kobe averaged 35/5/5/45% in his best statistical individual season ever. Many Kobe fans say this is the year he was robbed of MVP since Nash averaged a 19/4/10 and his stats don’t look as impressive. However, we have to keep in mind that MVP has never been about the player with the best stats. In 1962, Wilt averaged 50 PPG and Russell won MVP averaging 18 PPG. Wes Unseld won MVP in 1968 averaging 14 PPG when Elvin Hayes was averaging 28 PPG. Magic won MVP in 1987 averaging 24 PPG when Jordan was averaging 37 PPG. So clearly, MVP is not just about stats its about the team record. That’s why Kobe was 4th place in MVP voting that year, because his team only won 45 games. But Kobe fans say he deserved it anyways because his team ‘sucks’ that much.

As you can see, Kobe’s team isn’t much worse than what Lebron had in 2007. Now remember, Kobe led his team to 45 wins and then proceeded to blow a 3–1 lead to the Stoudemire-less Suns in the 1st round. Lebron led his team to 50 wins and all the way to the NBA Finals. Yet nobody ever complains about Lebron being robbed in 2007. In fact, in 2006 Lebron was 2nd in MVP voting. But Kobe somehow got ‘robbed’ in 2006. Nash won MVP that year and fittingly, was the one who beat Kobe in the playoffs that year. If you got ‘robbed’ you usually beat the player who robbed you like what Hakeem did to Robinson in 1995 or what Jordan did to Karl Malone in 1997. That is not the case for Kobe in 2006 in fact he blew a 3–1 lead to the player who ‘robbed’ him.

2007: Kobe averages 31/6/5/46% but his team wins 42 games and they lose in the first round again. However, he’s actually 3rd in MVP voting this year. Dirk’s Mavs has the best record by far that year and Dirk wins MVP (but proceeded to choke that year in the playoffs losing to the 8th seeded Warriors). I don’t think Kobe deserved it this year either as his team record and individual stats were both worse than 2006 and I already explained why he was not robbed in 2006.

Also, CP3 might not have been the only one robbed that year. 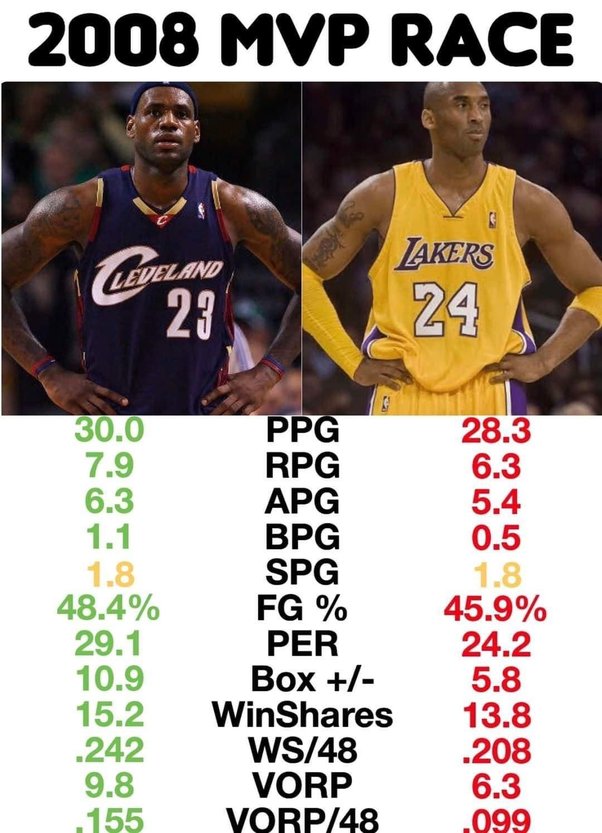 See, just like 2006 and 2007, Lebron might have been robbed in 2008 too. The fact that Lebron was making deep playoff runs with his best teammates being Larry Hughes and Zydrunas Ilgauskas should say a lot, and yet nobody ever complains that Lebron was robbed during these years like Kobe fans do.

2011: Kobe averaged 25/5/5/45% and led his team to 57 wins yet again, and was 4th in MVP voting that year. Derrick Rose won MVP that year because it was his best statistical season averaging 25/4/8/44% and leading his team to 62 wins. Rose had the better argument than Kobe that year.

2013: Kobe averages 26/5/6/46% and his team wins 45 games and was 5th in MVP voting. It’s notable that despite having Steve Nash, Dwight Howard and Pau Gasol on the roster, Kobe won the same amount of games as he did in 2006 when he had Odom, Smush and Kwame. So his argument for MVP this year is clearly worse than in 2006 (which I already explained he was not robbed that year). Lebron wins MVP that year averaging 27/8/7/56% and leading his team to 66 wins including a 27 game winning streak. There was no way Kobe was getting it over Lebron that year.

2014–2016: Kobe was injured and arguably became the worst player on his own roster, and his teams were pitiful, including winning a record low 17 games in 2016! so there’s no argument for Kobe in these years at all.