Pretty simple answer, the Celtics simply outmatched the Lakers, and by the time the Lakers caught up, he was injured and no longer the same. 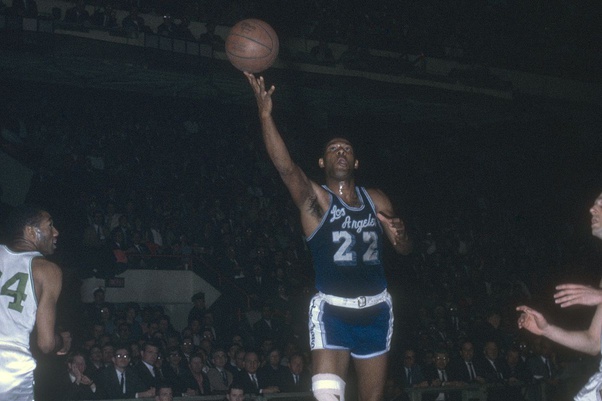 We can check his stats in the Finals

Baylor took the (still Minneapolis) Lakers to the Finals as a rookie. His second best teammate at this time was an aging Hall of Famer Vern Mikkelsen. Mikkelsen helped put up 14 PPG / 8 RPG and that was really it. He was up against a loaded Celtics team with a whopping 6 Hall of Famers in Russell, Sam Jones, Bob Cousy, Frank Ramsey, Bill Sharman and Tom Heinsohn. He didn’t have a chance and was swept.

This was Baylor’s peak and probably his best chance to win a title. He finally had some help in developing superstar Jerry West and had a capable third star in Rudy Larusso. This series went 7 games and famously came down to a missed Frank Selvy shot. The Celtics were just too clutch. They were led by the trio of Russell, Sam Jones and Tom Heinsohn and an aging Bob Cousy. Lakers were still outmanned..

Same story as 1962. West and Baylor were great in the series and Larusso added some help too but Russell/Jones/Heinsohn/Cousy were too much for them.

1965 Finals – he actually didnt play in this Finals due to injury. So I don’t think this FInals loss even counts, yet people count it.

West carried the team that Finals but obviously had even less help with Baylor out.

Another 7 game series against the Celtics. The core of Baylor/West/Larusso still there, against Russell/Jones but with the addition of John Havlicek now replacing Heinsohn/Cousy. You see the pattern here? Every time the Celtics lose a Hall of Famer to retirement, they add another one. Another close series but the Celtics were once again too clutch for them. Russell, Sam Jones and Hondo were three of the most clutch players of all time.

I would call this the last year of Baylor’s prime. He and West still performed very well, but Larusso got traded to the Warriors and the Lakers had Archie Clark who was capable but wasn’t quite as consistent as Larusso was. The Celtics meanwhile, in addition to Russell/Jones/Hondo, added another Hall of Famer in Bailey Howell on the team. So yeah, Lakers were outgunned once again.

Baylor was now out of his prime and the Lakers finally added some quality help in Wilt Chamberlain. This series once again came down to 7 games, with Bill Russell and Sam Jones both in their last years. The Celtics as ever, came through clutch. Jerry West averaged a ridiculous 37/5/7 in this series and became the only player ever to be awarded Finals MVP on a losing team. One infamous moment was that the coach Butch van Breda Koff had an issue with Wilt’s ego and refused to put him into the game in the last minutes of the game. This was a factor in the Lakers losing the series as well.

This was yet another 7 game series, and Baylor was on his last legs. Wilt and West pretty much carried this Finals, but the Knicks had a team just as loaded as the Celtics did! Willis Reed averaging 23/10, Dave Debusschere adding 19/13 a game and Walt Frazier averaging a near triple double 18/8/10 this series was too much for the Lakers and they lost once again.